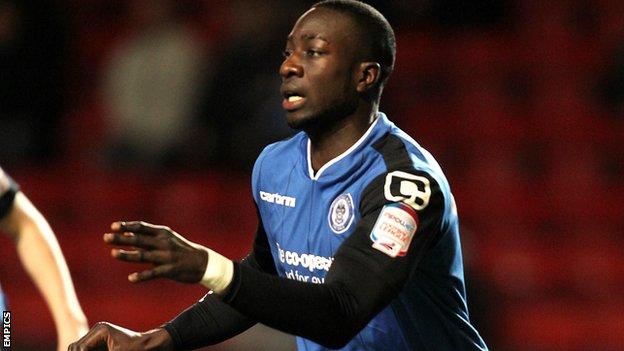 Baldwin, 29, joined City on loan from Southend in March and played nine times for the Grecians.

Amankwaah, 30, has signed at St James Park after previously turning down a new deal at Spotland, where he made 15 starts last season.

"Kevin has an opportunity to kick-start his career and get going again," Exeter boss Paul Tisdale told BBC Sport.

"He's a very talented senior player who's had a period when he's not had the best part of his career.

"He's a player I've seen play for 10-years plus, he's a versatile player, primarily a right-back so some competition for Steve Tully.

"He's a good footballer, athletic and knows us as well and that's half the battle, having someone who has a motivation to join us," Tisdale added.

"He fitted in extremely well, he's a very mature, experienced senior professional, certainly the type of player we need going into the start of the next cycle.

"I believe he'll strike up a good playing relationship with Danny Coles and is just the right type for us at this stage in our building process."

Amankwaah began his career as a trainee at Bristol City and made his debut as a 17-year-old in the old Division Two.

He spent a month on loan at Exeter's nearest rivals Torquay United in 2003, as well as temporary stints at Cheltenham and Yeovil, before signing permanently for the Glovers in March 2005.

He moved to Swansea in the summer of 2006 before joining Swindon two years later, and then spent three months on loan at Burton late last year before joining Rochdale.

And despite having an offer to stay at Spotland, Amankwaah says Tisdale persuaded him that Exeter was the right place for him to move to.

"I was really impressed, he was down to earth. I'm based in Bristol, so it's close, and he convinced me to sign," said Amankwaah.

"Early in my career I did have a lot of long-term contracts with teams but recently I've been here, there and everywhere, so it'll be nice to settle down and get my game going again.

"I feel my main position is an attacking right-back, I love to get forward, I can also play centre-half as I did for Rochdale, I played there against Exeter last year," he added.