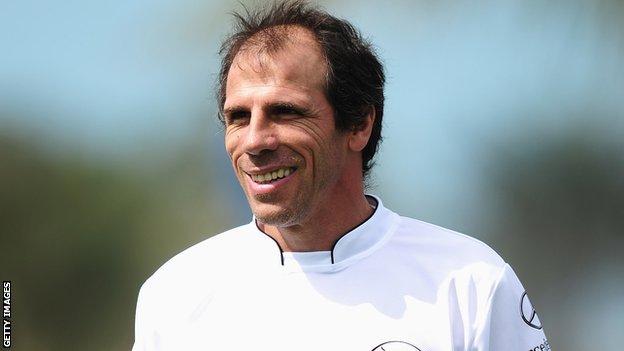 Former West Ham boss Gianfranco Zola looks set to become the new manager of Watford following the takeover of the club by the Pozzo family.

The Pozzos, who already own Italian Serie A side Udinese and Spanish club Granada, completed a deal to buy the Hornets last Friday.

And Giampaolo Pozzo told Sky Italia that they have already reached a verbal agreement with 45-year-old Zola.

Current Watford boss Sean Dyche is said to be aware of the situation.

Dyche, who is continuing to do his job despite the current speculation, led the club to 11th place in the Championship last season, their best finish for four years.

But when asked about the likelihood of Zola replacing him, Pozzo said: "Zola? We are on the right path and hence, I believe he will be our new coach.

"The English coaches are different to that of the Italians in terms of managing. Before deciding on the coach we needed time.

"My son (Gino) will be in London as well tomorrow [Tuesday] and there should be no problem."

Zola was in charge of West Ham from September 2008 to May 2010, having previously had an illustrious playing career during which he played over 300 games for Chelsea and won 35 international caps.

And it is expected he will be joined at Vicarage Road by former Hammers chief executive Scott Duxbury, with whom he enjoyed a strong working relationship.

Pozzo said the family's aim after buying the Hornets from Lawrence Bassini, who fronted the takeover by Watford FC Limited's £440,000 takeover 15 months ago, was to "revive a historic club" and take it back to the Premier League for the first time since the 2006-07 season.

Zola would not be the first Italian to manage Watford, Gianluca Vialli having taken charge in the 2001-02 season.