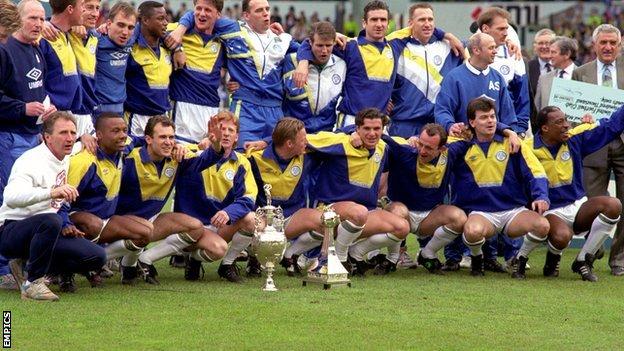 Former Leeds manager Howard Wilkinson has paid tribute to the late Gary Speed on the first anniversary of his death.

Speed, who was found hanged at his home on 27 November 2011, made 249 league appearances for Leeds.

Wilkinson had Speed in his title-winning side of 1991-92.

"If you looked at Gary you got a bit of everything. By the time he left the club he'd played every outfield position and never once complained," Wilkinson told BBC Radio Leeds.

"If you had one rule in a football club it would be that every player would swear to always do their best for the team. That was Gary Speed.

"He had a great attitude and was very genuine and honest from a very young age. He was a pleasure to work with."

After leaving Leeds for Everton in 1996, Speed went on to play for and captain Newcastle, Bolton and Sheffield United before briefly managing the Blades.

He was appointed Wales manager in December 2010, following a 14-year international playing career in which he won 85 caps, and led the country to three successive victories prior to his death.

Wilkinson remembers Speed as being modest about his capabilities as a leader when he was a player.

"I remember sitting him down one day and giving him a word of warning about the future and looking forward," he added.

"I said that if he continued in the vein that we'd seen at that time then he'd make a captain because he was eager to learn and I could see that as he matured he would be a great leader.

"It surprised him enormously because he was a shy bloke. But he was eager to learn and he was a great example and that's where leadership can start from."

A minute's applause was held before kick-off in Tuesday's match between Leeds and Leicester to commemorate the first anniversary of Speed's death.