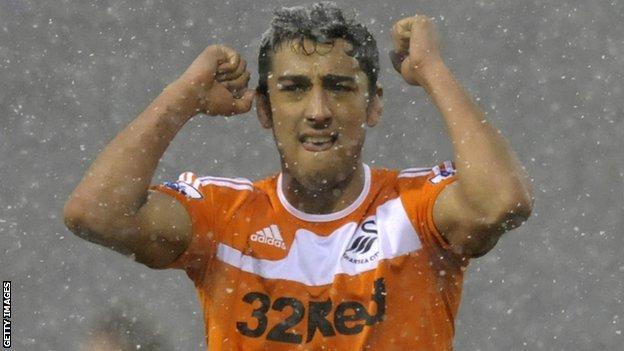 Swansea City chairman Huw Jenkins hopes the club's Olympic contingent will not be "overplayed" at London 2012.

Jenkins is "very proud" that his club has the largest representation in the 18-man squad, with Joe Allen, Neil Taylor and Scott Sinclair selected.

But the three will miss most of Swansea's pre-season with new manager Michael Laudrup as they link up with Team GB on Saturday.

"It is difficult as our players getting recognition is great," said Jenkins.

"But it is a fine balance with players resting or playing competitively right through.

"There is quite a large squad that has been picked for the Olympics so let us hope the games will be shared out and everybody will have an equal chance and not overplayed too much."

as Swansea manager in June, joining a club that bellied their pre-season billing as relegation favourites to finish 11th in their debut Premier League season.

Allen, Sinclair and Taylor were key members of Swansea's impressive top-flight campaign but will not join the rest of the Swans squad when they report for their first pre-season training session with Laudrup on Monday.

They will also miss Swansea's three-match pre-season tour to the United States and the earliest Allen, Taylor and Sinclair will be available for Swansea training will be on 2 August.

That is only if Team GB, whose final pool game against Uruguay on 1 August is in Cardiff, fail to progress to the knockout stages from Group A.

Midfielder Allen and left-back Taylor could play 13 competitive games for Team GB, Swansea and Wales before the middle of September - so Jenkins hopes their game-time is managed sympathetically.

Taylor, though, feels that playing so regularly is the price of success.

"I don't think you're going to have too many lads in the Olympics complaining about being involved and playing too many games," said the 23-year-old.

"There's no problems for me as if you want to be a successful footballer, you have to get used to being involved in a lot of competitions.

"You ask all of the best players like Ryan Giggs, travelling and playing games so regularly is what you want because it means you're doing something right."

Taylor is one of and one of four Swans from last season as Steven Caulker, who was on a season-long loan from Tottenham Hotspur, will join Allen, Sinclair and Taylor at London 2012.

Pearce was a regular spectator at The Liberty Stadium last season and also watched Swansea train.

"It was great for him to be at games and he learned a lot about us as players," admitted Taylor.

"It speaks volumes about what we did last season and the club's philosophy gives young players a chance.

"It's a great thing to have the most representation in the GB squad at the Olympics which is something, a couple of years ago, the club wouldn't have dreamed about."