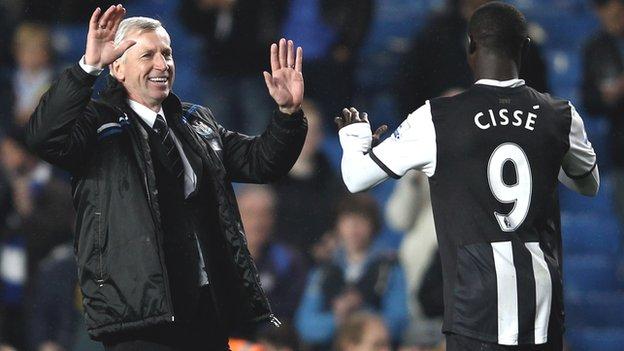 Newcastle United manager Alan Pardew says he is in talks with the Senegal Football Federation (FSF) about releasing Papiss Demba Cisse to play at this month's Olympics.

Pardew says the talks are currently only about Cisse and not his strike partner and compatriot Demba Ba.

"We have a debate about the Olympics as [he is an] overage player of course and we have to give our permission for that," Pardew told BBC Sport.

"So we're kind of discussing that."

Senegal's games at the Olympics

Countries have until 9 July to name their 18-man squads and are allowed to include a maximum of three players over 23.

Fifa regulations say under-23 players must be released for the tournament but over-age players need to get permission from their clubs to play.

Pardew is reluctant to lose either player ahead of the new English Premier League season.

"It's just awkward as we want to prepare our team for a very difficult season for us," he said.

"We have the Premier League and the Europa League. That's a tough extra 18 games if we get to the final.

Both Cisse and Ba were key members of Pardew's squad last season, Ba scoring 15 goals before he went to the Africa Cup of Nations and Cisse grabbing 13 goals in 14 matches after he signed for the club in January.

Senegal, who qualified for the Games with a play-off victory over Oman, begin their Olympic campaign against hosts Great Britain on 26 July before facing Uruguay and the United Arab Emirates.

The Senegalese are making their debut at the Olympics and will look to emulate Ghana, Nigeria and Cameroon, who have all won medals for Africa in the past.