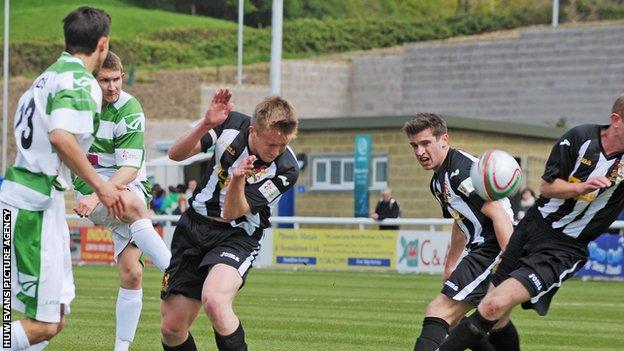 Bangor, as the seeded team in the tie, will no doubt start as favourites against Zimbru Chisinau; although they will find it difficult against their Moldovan opponents who last season finished third in the Divizia Nationala. The tie will be Bangor's first European match at their new Nantporth Stadium and will be aiming to re-create the good fortunes they had at their old Farrar Road ground.

Llanelli and Cefn Druids have both been drawn to Finnish opponents, Kuopion Palloseura (KuPS) and Myllokosken Pallo-47 (MyPa) respectively. The main concern for these two clubs is that the Finnish Premier League, Veikkausliiga, is currently halfway through the season with 16 matches already played.

Llanelli have the easier tie out of the two. Their opponents KuPS finished sixth in last season's Veikkausliiga and qualified for the competition as Finnish Cup runners-up, but they are struggling in this season, winning only four games in their opening 16 matches and are one place off the bottom of the table.

Llanelli manager Andy Legg has overseen an overhaul of his squad during the close-season. Legg has lost the services of prolific goal scorer Rhys Griffiths and promising young goalkeeper Craig Richards to rivals Port Talbot Town, but he has brought in players with European experience with other WPL clubs in Martin Rose and Luke Bowe.

MyPa, who face Cefn Druids, are no strangers to playing WPL teams in Europe as they defeated WPL champions The New Saints (2-0 on agg) in the Champions League qualifiers in 2006. They are currently fifth in the Finnish League and will fancy their chances of progressing against the Cymru Alliance side.

Cefn Druids did extremely well in last season's Welsh Cup and fully deserve a chance to perform on the European stage, but as in the Welsh Cup final against TNS it will be a step too far for Huw Griffiths' men.

From my own experience of playing in European competitions, it makes a big difference to the outcome of the tie if you are playing against a team midway through their league season.

I remember playing for Rhyl against Irish side Bohemians in the Intertoto Cup four years ago. For the first 45 minutes we were the better side and went in at the break with a one goal lead.

During the second half we were blitzed because of the sharpness and fitness levels of a team who had played nearly 20 competitive games. We ended up losing 5-1 and our lack of match fitness clearly showed against our much fitter Irish counterparts.

In my opinion Llanelli have the best chance of progressing because their opponents are struggling in their domestic league. Llanelli's main aim will be to keep it tight and try to grab an away goal over in Finland, which will make the task a little easier for the second leg at Stebonheath.

Bangor on the other hand will also need to keep it tight and if possible keep a clean sheet, taking at least a one goal advantage into the return leg in the Moldovan capital, Chisinau, next week.

I can see Llanelli and Bangor edging past their opponents and progressing to the second round but I think Cefn Druids have the toughest tie of the three and they will do well to keep the aggregate score down over the two legs against a strong MyPA outfit.

If all three Welsh clubs do get knocked out in the first round, will newly installed WPL secretary Gwyn Derfel push on with his predecessor's wishes to move to summer football or will he have his own agenda on how to improve the fortunes of Welsh clubs in Europe?