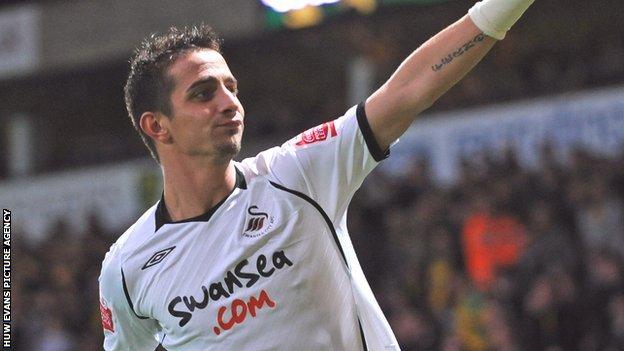 The 30-year-old Dutch midfielder was a key part of the side to win promotion to the Championship.

But Bodde suffered three cruciate ligament injuries during his time at the Liberty Stadium.

"It's been frustrating at times with all the injuries, but the fans have always been very supportive and warm towards me," Bodde said.

"That support has helped me fight my way back from the injuries and I will always be extremely grateful to them for that."

Bodde has played just four first-team games since November 2008 because of ongoing injury problems. He is returning to the Netherlands to continue his career.

He suffered his first cruciate ligament injury in his left knee more than three years ago during Swansea's 3-2 home defeat to Birmingham City.

A subsequent operation kept him out for 10 months before he made his first comeback against Sheffield United in September 2009 but lasted just nine minutes before the knee failed him again.

Bodde made it back into the Swansea first team in February 2010 but lasted 28 minutes before limping off with a recurrence of his original knee problem.

His performances soon attracted interest from the likes of Derby County, Middlesbrough and Reading, while in subsequent seasons Swansea had to fend off bids from Wigan Athletic and Bolton Wanderers.

Bodde has now started training with his home-town club Den Haag and plans to continue his career in the Netherlands.

"Playing an important part in the side that clinched promotion to the Championship under Roberto Martinez was a big highlight for me, along with experiencing the first Swansea versus Cardiff derby in the Carling Cup.

"But I'll always be sad that I couldn't work properly under [former manager] Brendan Rodgers and show him what I could do.''

Swansea chairman Huw Jenkins wished Bodde well and thanked him for his time at the Welsh club.

"From the moment Ferrie joined Swansea City he has been a colourful character on and off the field and his presence around the club will be missed," Jenkins said.

"There is no doubting his talent and he would have been one of the best players in the Championship and probably one of the best in the Premier League barring the injuries he's had to put up with.

"We have all felt for him over the last few seasons because he hasn't been able to display that talent on a regular basis.

"We've tried to provide Ferrie with all the support and help he's needed - and we will continue to do so. We'll be keeping in touch with his progress and it goes without saying that we wish him well for the future.''