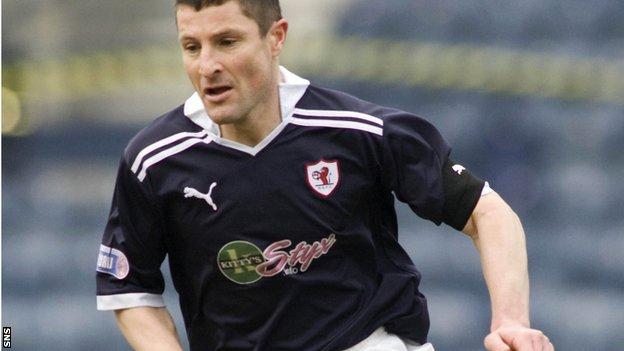 Raith Rovers have appointed Grant Murray as player/manager following the depature of John McGlynn to Hearts.

The 36-year-old, who was already involved in coaching at Stark's Park, has signed a two-year contract.

Vice-chairman Turnbull Hutton told Rovers' website: "We had a ready-made succession plan in place, should the need arise."

The veteran defender started his career with Hearts before spells with St Johnstone, Partick Thistle and Kilmarnock before joining Rovers in 2009.

"Whilst we were sorry to lose John McGlynn, the board always knew that it was possible that a manager of John's calibre would get the opportunity to develop his career at a top-flight club," said Hutton.

"Encouraged by John, both Grant and Laurie have taken their coaching qualifications while continuing with their playing careers and, along with their knowledge of all the retained players, this made them both ideal candidates to take the step up at this time.

"Additionally, the fact that they are both model professionals in their own right will mean that they will have no difficulty, we are sure, in commanding the respect of the dressing-room.

"Paul, who is currently on holiday, has been and will continue to be a vital cog in the wheel, even moreso now given that both Grant and Laurie could well be on the pitch."

Murray is looking forward to leading the Division One club.

"I'm obviously delighted for John that he has got this move and, after the initial disappointment of learning that Raith Rovers would be losing him, I'm excited to be getting this opportunity to take over from him," he said.

Ellis has an upcoming testimonial match to mark his 10 years of service - against McGlynn's Hearts.

"The education and help that John McGlynn has given Grant and myself over the last few years is greatly appreciated and it's fitting that his return to Stark's Park is the first game of his new challenge," said the 32-year-old.