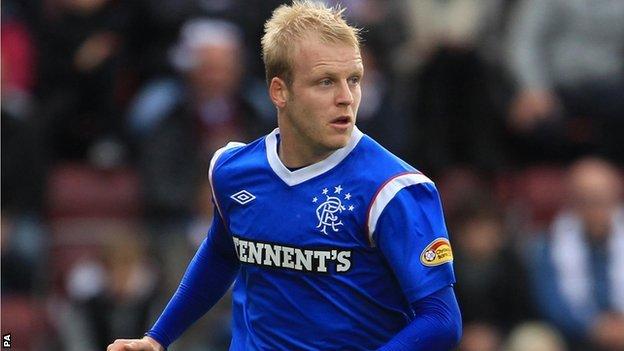 Everton have signed striker Steven Naismith after he rejected a contract transfer from the old Rangers to the new company.

The 25-year-old has moved on a free transfer and penned a four-year deal.

"We are delighted that Steven has agreed to join us," Everton boss David Moyes told the club's website.

"He will be an excellent addition to the players we already have and we look forward to him being fit and ready to play at the start of the season."

Moyes added: "He is an established international who can play in a number of positions. He has a flexibility we always like in our players and which will hopefully prove to be very useful for us."

Naismith began his career at Kilmarnock where he won the Scottish Football Writers' young player of the year award in 2006 and the Scottish Professional Football Association's equivalent a year later.

He switched to Rangers in August 2007 for £1.9m and scored 28 goals in 98 league appearances for the club, although his 2011/2012 season was ended in October after he suffered a cruciate knee injury.

He has 15 international caps for Scotland and will join up with the rest of his Goodison Park team-mates for pre-season training as they build up to the 2012/2013 Premier League campaign.

"It is a great honour to be joining a club of Everton's wonderful history and to have the chance to play with such a talented group of players in the world's best league in front of such a passionate group of fans," said Naismith.

"I look forward greatly to working with the manager David Moyes and all the staff at Everton and working hard to deliver on the pitch to repay their, and the chairman Mr Kenwright's, faith and belief in me."