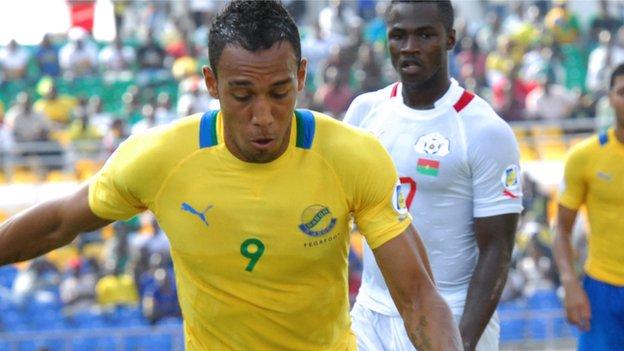 Gabon star Pierre-Emerick Aubameyang, 23, has been confirmed in the country's Olympic 18-man squad.

The country's three over-age players in the squad are goalkeeper Didier Ovono, 29, and defenders Bruno Ecuele Manga, 23, and Charly Moussono, 27.

Aubameyang, who plays for St Etienne in France, was one of the stars for Gabon as they reached the last eight of the 2013 Africa Cup of Nations that they hosted.

Gabon's Group B matches at the Olympics

Nearly half of Gabon's Olympic squad were part of the Panthers' Nations Cup squad, including all three over-age players.

Gabon qualified for the Olympics by winning the first-ever African Under-23 Championship last year, surprising many by beating hosts Morocco 2-1 in the final.

Coach Jean-Claude Mbouronot has called up 14 of the team that won in Morocco for the Games.

But one notable absentee is Bordeaux's Andre Biyogo Poko, who misses out through injury.

They will open their Olympic campaign against Switzerland on 26 July before taking on Mexico and South Korea in Group B.

The Olympic squad will now head to Austria for a training camp, which includes a friendly against Honduras, who are also preparing for the Games.

However, Mbouronot is far from happy with the way in which his side have prepared for their first Olympics.

"We've had difficulties implementing this programme for a long time for several reasons that I cannot go into. But what is sure is that we are not well prepared.

"We hope now that this final camp in Austria will take place and that this will help them to prepare well to take on the various opponents."