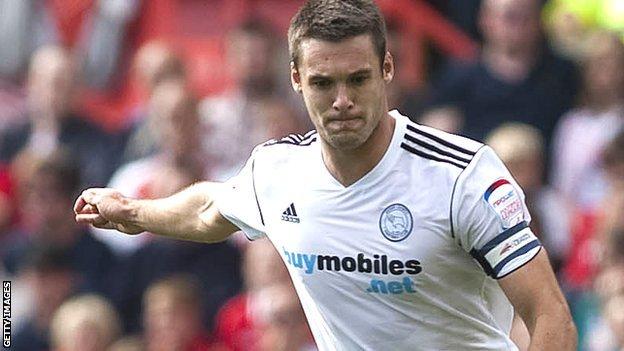 Defender Jason Shackell has left Derby County to join Burnley for a fee thought to be around £1.1m.

The 28-year-old centre-back has signed a four-year contract at Turf Moor and becomes their third summer signing.

The Rams had previously turned down four bids from three different clubs for Shackell, but accepted an undisclosed offer from the Clarets.

Shackell told BBC Radio Lancashire: "I knew Derby were quite keen to get some money in so I thought it could be a possibility.

"I had a great year there last year and I got on really well with the lads. It's a fantastic club and I really did enjoy my time.

"But if the club wanted to cash in, as they say, it left me in a difficult position. I'm not going to hang about somewhere where you're not sure where you stand.

"Once I met the gaffer (Eddie Howe) and his team, I was very impressed and I was really looking forward to coming down.

"The last four or five years have been crazy and I'm looking forward to getting settled somewhere. Hopefully I'll be here for a few years to come."

Derby boss Nigel Clough said: "Jason has always been 100% professional and a fantastic player to work with. Having played every minute of every game last season it came as no surprise that other clubs were interested.

"Although I am sad to see Jason leave, we have Jake Buxton, Tom Naylor and Mark O'Brien, who have all proved to be more than capable at performing in the Championship."

Leicester City and Cardiff City were also understood to be interested.

Burnley have also added and Leyton Orient winger George Porter to their squad since the end of the season.