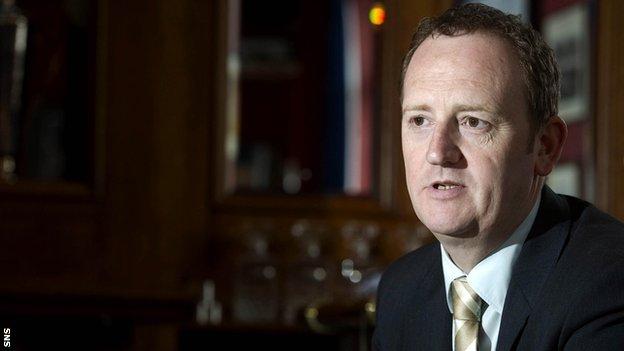 Dundee say they "cannot vote" on Rangers' application to join the Scottish Football League due to a conflict of interest.

BBC Scotland has learned the Dens Park club are likely to be invited to replace the old Rangers in the Scottish Premier League for season 2012-13.

None of this means that we have been notified by the SPL, SFL or the Scottish FA that our status as an SFL club has changed or is due to change

Rangers have applied to join the SFL and say they will enter whatever league the organisation places them in.

Dundee say no other Division One clubs have been told they are conflicted.

SFL clubs met on Tuesday to discuss proposals to place Rangers in Division One in the event that their application to enter the SPL was turned down, with Division One runners-up Dundee earmarked to replace the old Rangers in the top flight.

SPL chairmen formally rejected the Rangers newco application to replace the old Ibrox club at a vote on Wednesday and now the SFL must decide whether or not to take Rangers in.

However, 11 SFL clubs have publicly stated their opposition to a Division One entry for Rangers and say the relaunched club should start life in Division Three - the bottom tier of the senior league set-up.

Dundee chief executive Scot Gardiner said: "The initial advice was that SFL rules clearly state that, save in extraordinary circumstances, all members must vote and cannot abstain, such action would incur a heavy fine and there was an existing precedent.

"Prior to the meeting [on Tuesday] however and following discussions with the SFL office bearers and their legal team, we were informed that these were extraordinary circumstances and there was indeed a clear conflict of interest and it would be against natural justice for us to vote.

"We could take part in the debate but not the vote. We were the only team in Division One told this as no other club was conflicted.

"Now that there is to be a formal vote on these matters at Hampden on 12 July, our technical position is clear.

"We do not have to abstain as we cannot vote due to the stated potential conflict of interest which would be against natural justice. This is not our choice, it is however a fact that we cannot vote.

"None of this means that we have been notified by the SPL, SFL or the Scottish FA that our status as an SFL club has changed or is due to change because we have not.

"We do hope however that this situation can be addressed as quickly as possible as it is clearly and obviously a tremendous distraction for all of us at Dundee FC with the season looming larger than ever."

Dunfermline, who were relegated from the SPL at the end of last season, believe they should replace Rangers in the top division and have asked the league for clarification on the issue.