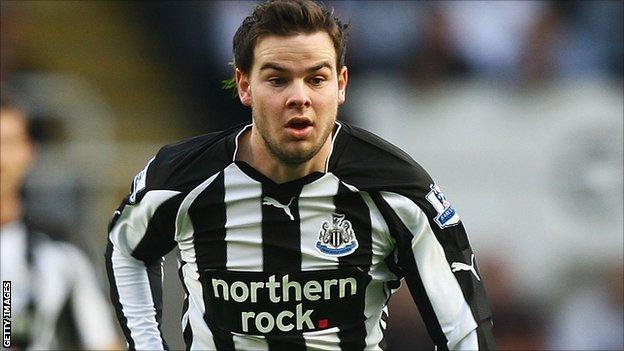 Reading signing Danny Guthrie says he is determined to make up for lost time and help his new side stay in the Premier League next season.

Midfielder Guthrie, 25, endured a frustrating first season in the Premier League with former club Newcastle, only playing 16 times for the Magpies.

And Guthrie now intends to prove he can cut it in the top flight.

"I'm at the stage of where I have to play, that was part of the reason I signed," Guthrie told BBC Berkshire.

"I want to play every game but I've got to earn the right to do that. I'm a really ambitious player and person.

Realistically I think the aim is to stay in the league. Anything other than that is a bonus

"It was a strange season last year, I probably played the best football of my career but it was frustrating to only get 19 games which is one of the reasons I moved on."

Guthrie was convinced to sign for Reading after Brian McDermott visited him on holiday in Dubai. The former Liverpool trainee says he was immediately impressed by McDermott's ambition and could not wait to sign.

"It's exciting times for me and the football club, you can see the investment around the place with the type of players there are bringing into the club and being linked with," added Guthrie.

"It's their first season back in the Premier League so I'm raring to go. I just want to meet the players who I'm going to go on this journey with next season."

Guthrie says that despite Reading's ambition - which has already seen them sign winger Garath McCleary with striker Pavel Pogrebnyak set to follow - they should not look past Premier League survival.

And he says the performances of Swansea, Norwich, QPR and his old side Newcastle last season are the perfect examples.

"Realistically I think the aim is to stay in the league. Anything other than that is a bonus," said Guthrie.

"We can all take heart from Swansea, Norwich and QPR. They all stayed in the league and played the right way and obviously it was only Newcastle's second season back.

"So we can take heart from all these examples."