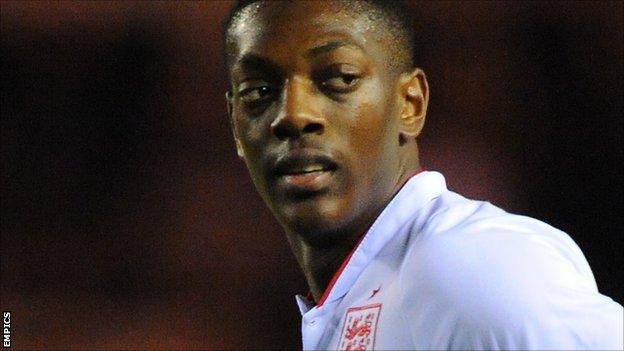 Marvin Sordell has said he will head to London 2012 with the sole intention of winning a gold medal for Team GB.

The 21-year-old was one of three men playing at clubs currently outside the Premier League to be named in Stuart Pearce's 18-man squad for the Olympics.

"Regardless of what walk of life you are from, you want to succeed and do your best," Bolton Wanderers striker Sordell told BBC Radio Manchester.

"There's no point trying to aim for 'alright'. You want to aim for gold."

Sordell, who joined Bolton from Watford during the January transfer window, added: "I didn't really expect it to be honest. When I got the call from Stuart Pearce, I was quite shocked.

"I'm looking forward to what will be a massive occasion. It's a once-in-a-lifetime opportunity. Not many people can say they've competed in an Olympics in their home country."

Team GB will play Senegal, UAE and Uruguay in their group games as they take part in the Olympic football competition for the first time since 1960.

They will play a friendly against Brazil in Middlesbrough on 20 July, six days before their opening group fixture against Senegal at Old Trafford.