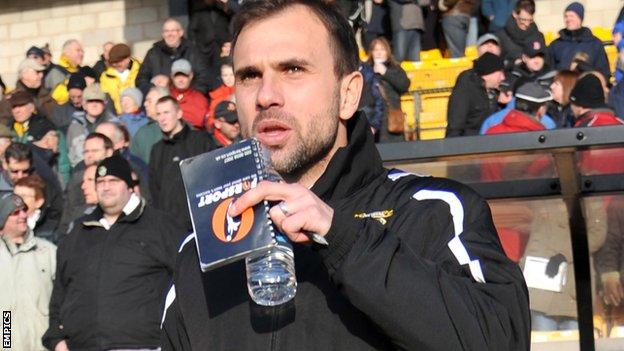 Plymouth Argyle manager Carl Fletcher says the club has missed out on transfer targets because they cannot afford their wages.

Argyle are beginning their first full season since coming out of administration and being taken over by businessman James Brent.

Only two new faces have arrived in the summer in goalkeeper Rene Gilmartin and striker Paris Cowan-Hall.

"Things like that are disappointing, but that's the way football goes really," he added to BBC Radio Devon.

Fletcher says he is looking to improve his squad, but would not be drawn on what areas he would like to better.

The Devon club have only two experienced forwards in Nick Chadwick and Warren Feeney with 20-year-old Cowan-Hall having joined from non-league Woking and teenage youth products Matt Lecointe and Jared Sims also available.

"We've got five strikers at the minute and we aren't going to play any more than two or three," Fletcher said.

"So as it stands we're overloaded already, but we'll see how it progresses over the next few weeks."