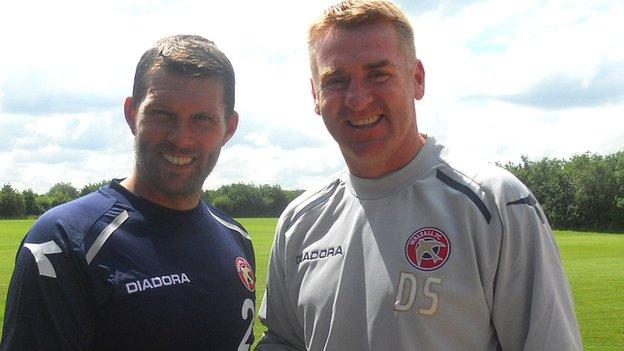 Walsall keeper Jimmy Walker has signed a new one-year player-coach contract with the League One side.

The 38-year-old, who stressed in May that he will assist Mick Kearns with coaching.

Jimmy is an integral part of the dressing room

"Jimmy is an integral part of the dressing room so I'm delighted to have him on board," said manager Dean Smith.

The Nottinghamshire-born goalkeeper began his career with Notts County as a trainee before first joining Walsall in 1993.

He then moved in 2004 to West Ham, for whom he made just 20 appearances in five years.

Paul Lambert took him on a three-month loan to Colchester in November 2008, while he also spent six weeks on a short-term deal under Harry Redknapp at Spurs immediately before being brought back to Bescot by Chris Hutchings in October 2010.

"He will be competing with David Grof for a place in the starting line-up," added Smith. "But, with all his experience and know-how, he will be a valuable member of the coaching team.

"He will help David develop and also work alongside Mick Kearns with the young goalkeepers at the club."