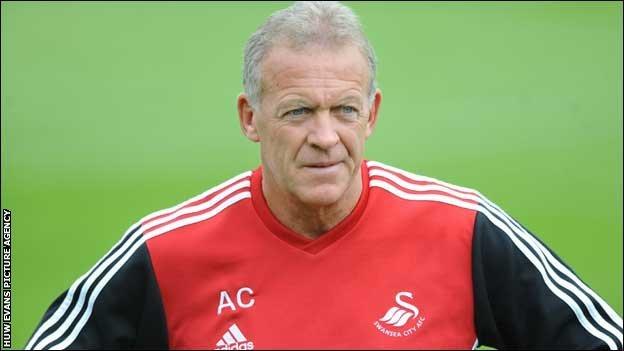 The 58-year-old has been awarded a new contract until 2014 and joins Laudrup and assistant Erik Larsen to complete the new-look Swans backroom team.

Curtis, whose association with Swansea began in 1972, moves up as another Swans stalwart, Kris O'Leary, takes his old development role.

The former Barcelona and Real Madrid playmaker appointed Larsen, his assistant at Real Mallorca, as his number two and now Laudrup has the experienced Curtis among his deputies as the former Denmark international begins his first season in English football.

"Following in the footsteps of Brendan is a big ask," admitted the former Leeds United and Swansea forward.

"But because Michael was such a great player, the players will listen to everything he has got to say.

"He has the instant respect because of the player that he was and all great players have a little aura around them and Michael certainly has that."

He returned to the Vetch Field and helped guide Swansea into the old First Division under John Toshack in 1981, scoring on Swansea's top-flight debut against old club Leeds in a 5-1 triumph.

Curtis, who scored six goals in 35 Wales internationals between 1976 and 1987, left Swansea following their relegation in 1983 and played for Southampton, Stoke City and Cardiff before returning to Swansea for the 1989/90 season.

He was also Wales under-21 boss Bryan Flynn's assistant, has worked as a Football in the Community officer, matchday host, youth team manager, reserve team manager, assistant manager and caretaker boss in his post-playing days at Swansea since 2004.

"Alan will help provide Michael with the knowledge of not only the existing squad and his experience of life in the Premier League, but how things have run at the club over the years," said Swans chairman Huw Jenkins.

"Alan will work closely with Michael on all first team matters. He will help provide the continuous link to what we have developed at this football club over the last few years.

"It will help make Michael's transition into our football club as efficient, effective and comfortable as possible.

"Alan's reputation as a coach and a person is right up there with the best and we would be foolish not to utilize his talents. He has been a fantastic servant to this football club - and long may that continue.'