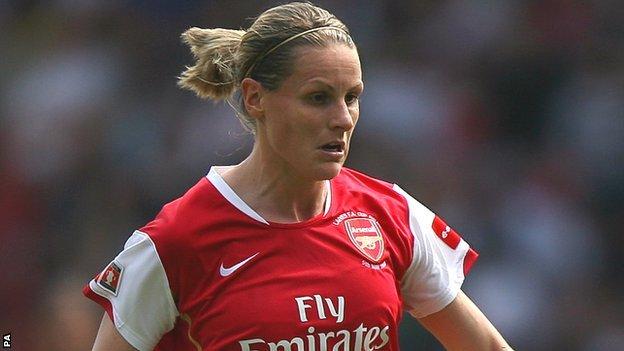 Arsenal moved eight points clear at the top of the Women's Super League with a 4-2 win at Chelsea.

The reigning champions led through Little's 10th-minute penalty but then had to come from behind after England midfielder Dani Buet struck twice.

But Smith equalised on 71 minutes and put Arsenal ahead nine minutes later before Little sealed the victory.

After Little had given the visitors their early lead, former Arsenal player Buet equalised direct from a 14th-minute corner that was misjudged by goalkeeper Emma Byrne.

And in the final minute of the first half, Buet shot the home side in front with a spot-kick following a foul on right winger Dunia Susi by central defender Gilly Flaherty.

After the break the hosts twice almost doubled their lead - defender Gemma Bonner having a 55th-minute header cleared off the line by Steph Houghton, then striker Kate Longhurst hitting the post just after the hour.

Arsenal made the most of their narrow escapes though, and swept to victory with three late strikes.

Smith headed the Gunners level and grabbed her second in the 81st minute with a low shot just inside the post.

And six minutes from time Little wrapped up the three points, rounding goalkeeper Sarah Quantrill to slide the ball into the empty net.

Chelsea's defeat left them in fifth place, though only on goal difference as they are level on points with the three clubs immediately above them.