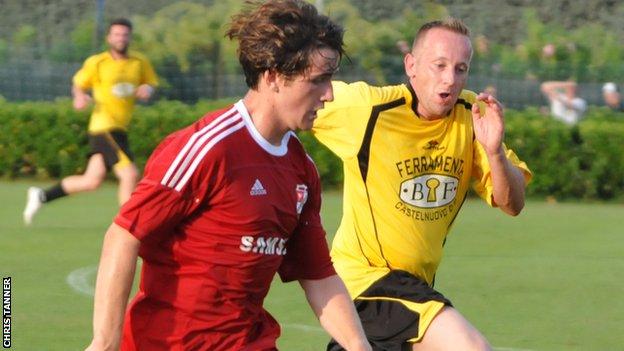 Luke Rooney says he is prepared to fight for his place in the Swindon Town midfield next season.

Rooney, 21, joined Town from Gillingham in January and made 20 appearances last season, seven of them as a substitute.

Rooney was impressive in the 45 minutes he was given against Verona but Di Canio wants the winger to work on his game when he hasn't got the ball.

When he has, the Italian says he looks like the best player around.

He's still young and hasn't had a great deal of league football in his career but these past few months have been a real learning curve.

He looks fitter than when he arrived in January, carries a commendable attitude and possesses raw ability. This is the season when he could step up to the mark.

He can play on either wing but will face stiff competition for a place in Paolo Di Canio's side from Matt Ritchie and new signing Gary Roberts.

"I knew players would come in but it's down to me to prove I'm better than them," he told BBC Wiltshire.

"As selfish as that sounds, that's what you've got to do.

"There's always going to be competition and with how the gaffer is, he likes bringing players in.

"I'm sure he has got in his mind who he wants to play but maybe one or two of us can change his mind."

Ritchie was a key figure in Swindon's title win and his 11 goals in 52 games earned him the League Two player of the year prize.

But Rooney, who netted twice for the League Two champions last term, would have gone some way to impressing Di Canio during the club's pre-season tour of Italy.

The winger scored a hat-trick in Town's 9-1 demolition of a Verona select XI and Rooney admits: "It definitely gives me a bit of confidence to say you've scored three goals, no matter who it's against.

"You could tell by the preparation before the game that the gaffer that he wanted us to take it seriously.

"He's said to me that pre-season would be vital as when I was at Gillingham I was probably one of the fitter ones but when I came to Swindon I was a bit behind.