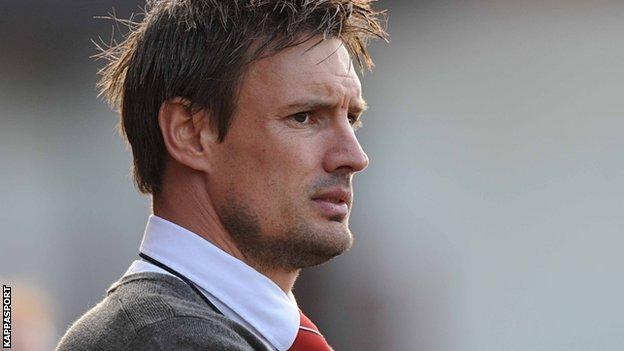 Centre-half Westwood only signed a one-year deal with Lincoln City in May, but Imps boss David Holdsworth has reluctantly allowed him to leave.

Holdsworth told BBC Lincolnshire: "Ash was almost apologetic really. It comes as a blow but I do understand."

The deal has been delayed because of Pompey's financial difficulties.

The Fratton Park club is currently in administration and under a transfer embargo.

But they hope the restrictions will be lifted next week, paving the way for Westwood to join.

Westwood was player-caretaker manager at Kettering last season and played with Appleton while the pair were together at Old Trafford.

Holdsworth had hoped the defender would play a key role for Blue Square Bet Premier side Lincoln this season but said he respected his decision.

"Ash said he had this opportunity and he felt it was one he couldn't turn down and would I understand, and not stand in his way," Holdsworth added.

"It comes as a blow because I have worked hard on my own in the summer and I know Ash would have been a good influence on and off the pitch for the players.

"While we have not been too impressed with the timing, I understand and we have to move on and look for another opportunity maybe."