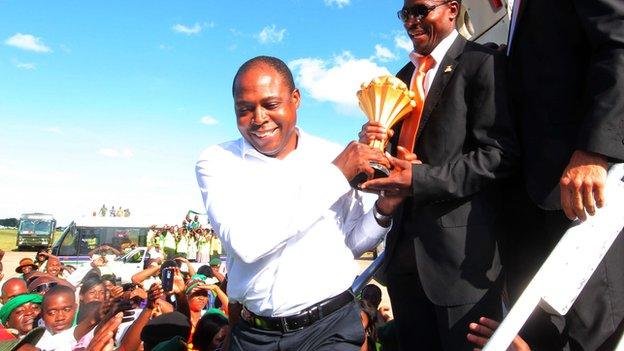 Zambian FA boss Kalusha Bwalya says the African champions can take nothing for granted ahead of meeting Uganda for a place in the 2013 Cup of Nations.

The sides will meet over two legs in September and October in the final round of qualifying for a place in January's finals in South Africa.

"Zambia-Uganda has always been a tough match but we are confident our players will be ready," Bwalya told BBC Sport.

"We are determined to defend the title in South Africa."

We hope to be able to defend our title

The Chipolopolo won the Nations Cup for the first time earlier this year, beating Ivory Coast on penalties in a tournament that was co-hosted by both Gabon and Equatorial Guinea.

Uganda, meanwhile, have failed to qualify for Africa's leading football tournament since contesting the final itself in 1978.

The Cranes' most recent failure came last year when being held to a goalless draw by Kenya at home, when a win would have qualified Uganda, rather than group rivals Angola, for the finals.

"We have learnt a lot from our mistakes and we shall be able to correct them," Laurence Mulindwa, the head of the Ugandan FA, told BBC Sport.

"This time around, it's our time."

Mulindwa is buoyed by the fact that his nation will be playing the second leg in Uganda, where home advantage could be crucial in determining the winner of the tie.

"Playing away first makes thing easier because when you end up in another country, there is a lot of pressure," he explained.

"So if we are playing it in Kampala, we can sum it up there and qualify.

"This time around we have a better team and younger boys and therefore they can withstand the challenge that is there."

The Ugandan cites Zambia's surprise Nations Cup triumph as a reason to believe that his side can upset the odds and reach their sixth finals.

Bwalya, meanwhile, says his team may have to dig deep to find a way past familiar opponents.

"We know each other, they are a good team and they are always big derbies - it's a very tough match," said the African Footballer of 1988.

"Today in Africa, the game has changed and there are no small teams so there's no guarantee we will qualify.

"We will have to dig into your reserves, work hard as a team and try to play as well as we can and maintain the form we have had in the Nations Cup and qualifiers - and hope to be able to defend our title."

The first leg will be played on the weekend of 7-9 September, with the return match taking place on 12-14 October.

The draw for the final round of 2013 Nations Cup qualifying took place in South Africa on Thursday.