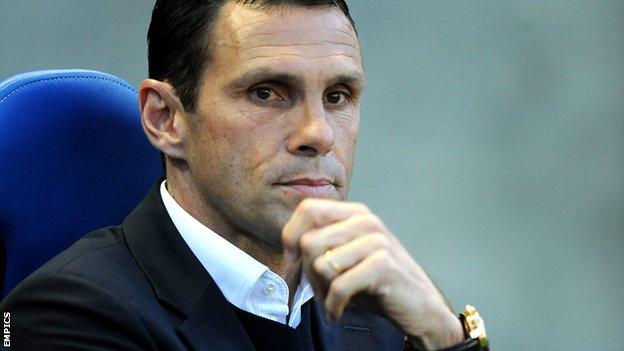 Brighton boss Gus Poyet says his priority is signing a new striker before the start of the new season.

Poyet has brought in four new players this summer but is yet to add to his forward line.

Speaking at a fans' forum broadcast live on BBC Sussex, Poyet said: "We are working on a striker. We've got a great chance to get a very good player.

"We need a target man, a powerful player up front. We need that player. That is the main aim now."

He added: "We need someone who's going to help us when we need to avoid the midfield - when there are too many players [in midfield] or they are too deep.

"Situations happen during the season and when you play against teams that are massive, they need to give you a hand attacking or defending set plays."

Poyet is adamant that a new striker will be a partner for Craig Mackail-Smith, rather than a replacement.

"Macca needs a type of player up front with him," the Uruguayan said. "I've been looking a lot but didn't get it.

"We got a couple of loans last year in Billy Paynter and Sam Vokes but I was still thinking that they were not the type of player I needed.

"I am still looking for that player and it's the most difficult. We are really concentrating on trying to make sure Macca can go and score 20 goals."

You can listen again the the Brighton & Hove Albion fans' forum for the next seven days via the BBC iplayer (UK only).