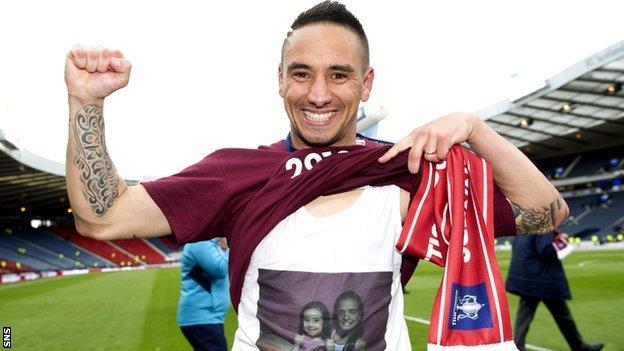 Hearts have announced the departure of Spanish winger Suso and confirmed that striker Craig Beattie has also left Tynecastle.

Both rejected offers to remain with the Edinburgh outfit.

The 27-year-old Suso had made 69 appearances since joining Hearts after leaving Tenerife in 2009.

Beattie, who signed a short-term deal in January and played nine games, had told BBC Scotland last week that he would be leaving Hearts.

The 28-year-old, capped seven times for Scotland, has had an offer from a Chinese club, while there is interest from England, but a possible move to a South African outfit fell through last week.

Having broke into the first team with Celtic, Beattie moved on to West Brom, from whom he had loan spells with Preston North End, Crystal Palace and Sheffield United.

He switched to Swansea City but was farmed out to Watford at the start of last season before being released in January.

Despite his lack of appearances for Hearts, one of his three goals proved to be the winner in the Scottish Cup semi-final against Celtic.

Suso will also be remembered for winning a second-half penalty in the final as Hearts hammered city rivals Edinburgh 5-1.

Before heading for Hearts, he also had loan spells with Atletico Arona, Laguna, San Isidro and Fuerteventura.