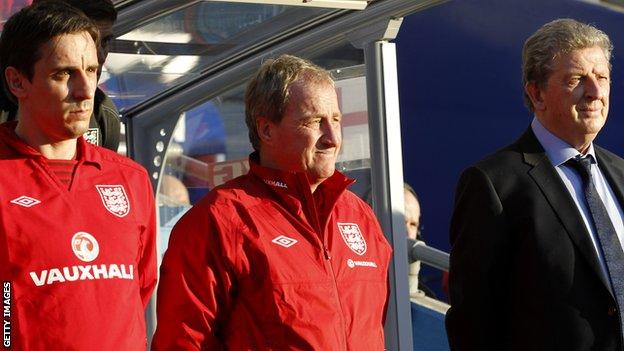 Ray Lewington has joined England's coaching staff on a permanent basis after signing a four-year contract.

Lewington, 55, worked alongside manager Roy Hodgson at Euro 2012 and has agreed to take on the role full-time.

In 1986 made player-manager of Fulham, a role he held for four years.

In 1990 stepped down to assistant, before moving to Crystal Palace as coach.

Made coach at Brentford in 1999, before he was promoted to manager the following year.

Lewington appointed reserve team manager at Watford in 2001 by Gianluca Villa, eventually succeeding the Italian in 2002.

After being sacked in 2005, returned to Fulham as reserve team manager. He has since been assistant manager, first-team coach and youth development boss.

The former Watford boss had been set to return to his coaching position at Fulham, where he was Hodgson's assistant for three years.

"This is a fantastic opportunity for me and one that I simply couldn't turn down," said Lewington.

"I really enjoyed the experience at the Euros this summer and am looking forward to spending more time with the squad as we look to qualify for the World Cup in Brazil."

Hodgson invited Lewington to join England's coaching staff along with Gary Neville, who is also on a four-year contract, and they will remain in the backroom team during the 2014 World Cup qualifying campaign, which begins away to Moldova on 7 September.

Firstly, England have a friendly on 15 August against Italy, who knocked Hodgson's side out of the Euro 2012 quarter-finals.