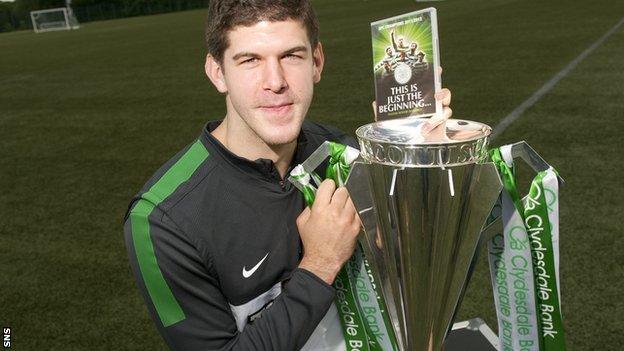 Celtic goalkeeper Fraser Forster had few concerns about the absence of high-profile Old Firm games when he considered his future this summer.

Forster rejected interest from elsewhere to sign a four-year contract at Celtic Park.

Not many keepers get the chance to play in Europe

But city rivals Rangers will not feature in Scotland's top flight this season after financial problems.

"Obviously the Old Firm games were big games, but every game is a challenge in its own way," said Forster.

"That, combined with Europe, should make for a good season.

"They were a big part of the SPL. But you have just got to look at the positives and move on."

Forster moved on from Newcastle United after two seasons spent on loan with Celtic after a fee was agreed between the clubs.

"Celtic, as a football club, speaks for itself," said the 24-year-old, who signed a four-year contract.

"We have got the chance to play in Europe again, which I'm delighted about.

"With the size of the club and the European chance, it was too good to turn down.

"Not many keepers get the chance to play in Europe.

"We did well last season as a squad, so there was a bit of interest elsewhere, but I always knew I would be back here.

"I think this is the right move at this point.

"I've progressed a lot in the last few years. It's important I keep doing that and keep playing first-team football."

Meanwhile, Celtic manager Neil Lennon confirmed that Scotland goalkeeper Craig Gordon, who remains a free agent after leaving Sunderland, was in his thoughts during the summer.

"For every position, you have to have options," said Lennon, who always stated that Forster was his main target.

"Fraser might not have signed and Craig was one of those options."