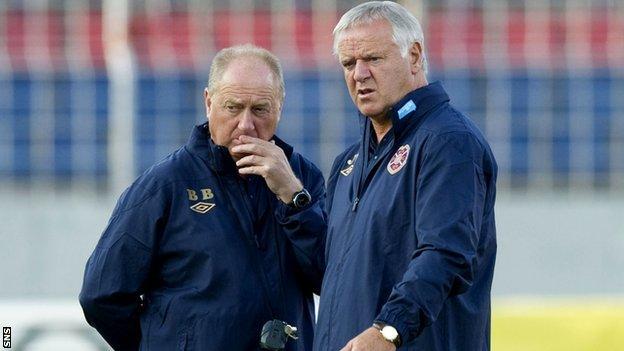 Billy Brown's hopes of being re-united full-time with Jim Jefferies could depend on Dunfermline regaining their place in Scotland's top flight.

Brown was not offered a new contract as assistant to Pat Fenlon at Hibernian.

And he is helping Jefferies, to whom he was long-time number two, with the Pars' pre-season training.

"If we got ourselves in the Premier League, it would be a lot easier," said Jefferies about the prospect of Brown staying on at East End Park.

"But that's not our decision and we'll keep our fingers crossed."

Dunfermline, who were relegated at the end of the season, and Dundee, who finished second in Division One, are vying to replace Rangers after the application from Charles Green's newco was rejected by the other SPL clubs.

Scottish Football League clubs will now vote on whether to allow the new Rangers into the First Division, but the SPL has yet to decide on who takes the vacant position.

Brown helped Hibs avoid relegation at the expense of the Pars last season.

Dunfermline have already started pre-season training and Brown has been called in to help Jefferies and present assistant Gerry McCabe, who remained at East End after the sacking of Jim McIntyre last season.

"His wife phoned me and said she would slip me a few bob if I got him out the house because he's just like a bear with a sore head," joked Jefferies.

"So I phoned him and he kindly offered to come and help because, when you're at pre-season training, there's a number of things go on and Billy loves to be involved in that side of it.

"So he's come in voluntarily to give us a hand.

"Gerry and I have worked well together last year and it's all about finance and Billy knows that."

Meanwhile, midfielder Stephen Husband, who worked with Jefferies and Brown at Hearts, is training with Dunfermline in the hope of winning a contract.

The 21-year-old, born in Kelty, near Dunfermline, has been released after two years by Blackpool.