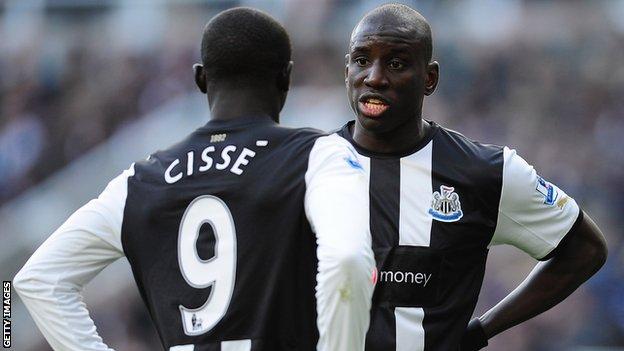 Senegal have omitted Newcastle United's Papiss Cisse and Demba Ba from their squad for this month's Olympic Games.

The Senegalese federation had been in talks with Newcastle, who were loathe to release Cisse in pre-season with an Africa Cup of Nations next January.

Magaye Gueye's inclusion is unexpected since the 21-year-old has previously represented France at youth level and has yet to appear for Senegal.

However, the Senegalese federation has told BBC Sport that clearance has been received from Fifa to allow Gueye's switch of nationality.

Both FC Copenhagen striker N'Doye and Diame played in this year's Africa Cup of Nations, when the Senegalese crashed out in the first round without a win despite being tipped by many to lift the trophy.

If they are to qualify for next January's finals in South Africa, the Teranga Lions must beat Ivory Coast over two legs in the final round of 2013 Nations Cup qualifying.

Senegal open their Olympic campaign against hosts Great Britain in Manchester on 26 July, before moving to London to face Uruguay at Wembley three days later.

The first-time qualifiers conclude their Group A campaign when taking on United Arab Emirates in Coventry on 1 August.