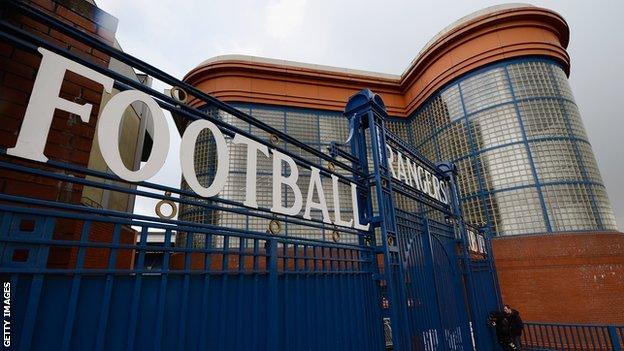 Dunfermline chairman John Yorkston is hopeful an agreement over reorganising Scottish football can be reached in time for the vote on whether to admit Rangers to Divisions One or Three.

Scotland's three governing bodies hope to bring proposals before the 30 Scottish Football League when they meet to decide the matter on Friday.

"I'm confident the SFL will deliver a skeleton of proposals," said Yorkston.

But he admits that they might not be to the liking of all clubs.

There's a whole raft of unanswered questions about the Rangers newco

"The SFL board knows what the clubs are looking for," Yorkston told BBC Scotland.

Dunfermline had previously voiced their opposition to Rangers being admitted to Division One, as have Falkirk, Raith Rovers, Morton, Livingston, East Fife, Stranraer, Stirling Albion, Peterhead and Clyde.

But some may alter their stance depending on proposals that are likely to include a new Scottish Professional Football League to combine the Scottish Premier League and SFL, play-offs to the top flight and changes to the distribution of finances and votes.

Charles Green's ruling consortium at Rangers was forced to apply to the SFL after its application to replace the old Ibrox club was rejected last week by the 11 remaining SPL clubs.

Clubs attending the SFL's special meeting at the Bell/Baird Suite on the fifth floor at Hampden Park will be asked to vote in three stages.

First, they will be asked to agree to the admission of Sevco Scotland Limited, who bought Rangers' assets after the old company headed for liquidation, as a member to the SFL.

Should that be carried, they will then be asked to vote on admitting Rangers to Division Three unless, by the time of the meeting, the SFL board has reached an agreement with the SPL and the Scottish Football Association and recommends its approval to allow the new club to play in Division One.

They will then be asked to approve the resignation of either Dundee or Dunfermline once the SPL has decided which of those clubs should replace the old Rangers in the top flight.

Some have interpreted the second stage as meaning that it will be the SFL board that will decide whether Rangers are admitted to Division One or the Third Division.

However, a senior SFL source told BBC Scotland that the clubs will, in essence, be given the chance to vote on the SFL's agreement with the other two governing bodies.

And Yorkston is also confident that the clubs will have the right to reject any proposals the footballing bodies come up with.

Raith Rovers chairman Turnbull Hutton, though, fears that the SFL clubs are being asked to give their board discretion to put Rangers into Division One and questioned whether that process constituted democracy.

He believes the clubs will not be given a vote on whether the new Rangers are admitted into the First Division.

Hutton says there are "a whole raft of unanswered questions about the Rangers newco - all of which could further implode if they were admitted in to the SFL".

First Division Rovers are concerned that SFL members have not yet had legal advice about admitting a club that could face further future financial and footballing penalties and will consider their stance once further information is received from the SFL.

Queen of the South have issued a statement saying that they too would reserve their position until the "full facts" were known but promised to take their fans' opinions into account and expressed their unhappiness that the future of Rangers has been placed in the hands of SFL clubs.

Dumbarton, who have taken Queens' place in Division One, have announced that they will vote in favour of admitting Rangers to the second tier after consulting their season ticket holders.