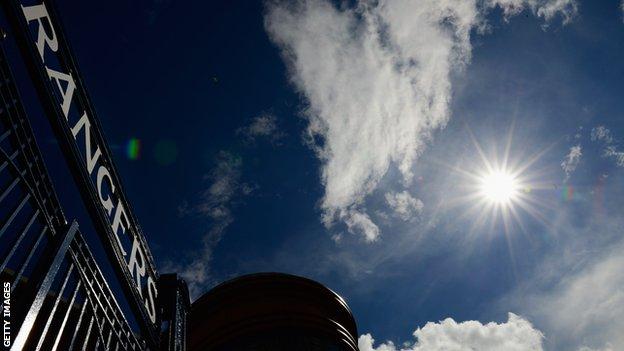 Henry McLelland says the threat of having Scottish Premier League money withdrawn will not force Annan into voting newco Rangers into Division One.

Scottish Football League clubs must decide whether the new club will play there or in Division Three.

The SFL is paid about £2m every year by the Scottish Premier League.

"The SPL are threatening that, without Rangers in Division One, the money would be withdrawn - because they can't afford to pay," said Annan's chairman.

It's total dismay at the way they are dealing with this. We feel as though we're being bullied

"The SFL accounts show that that money is almost the total money that's distributed to the clubs throughout the season.

"Annan would get around £60,000 that could disappear. But, if that's the case then as a club they will deal with it by cutting their cloth accordingly.

"We feel Rangers should be in Division Three and our stance hasn't changed."

And the 30 SFL clubs will meet on Friday to decide whether to accept the new Rangers as members - and in which division they will play.

Annan were the last club to join the SFL, in Division Three, replacing Gretna after their neighbours went into liquidation following relegation from the SPL four years ago and McLelland thinks that set a precedent.

"When Gretna hit trouble, it was made clear by the SFL then that, for the integrity of the game and the Scottish Football League, Gretna would have to drop into Division Three," McLelland told BBC Scotland.

"The same thing happened with Livingston. Rangers are a big institution, but that doesn't merit them being a special case."

SFL clubs could be asked to also agree to a future merger of their parent body and the SPL, with play-offs to Division One and a change to voting rights and money distribution.

"The restructuring of the game and the way forward needs to be dealt with seperately from the Rangers situation," said McLelland.

"Once the Rangers issue is settled then the clubs need to remain level-headed and move on to make radical changes for the good of the game, but that must be dealt with on its own."

McLelland is critical of the Scottish Football Assocation for failing to take control of the crisis and by allowing it to remain unresolved four weeks before the start of the new season.

The SPL and Scottish Football Association have warned that, without Rangers in Division One with the possibility of winning promotion to the top-flight in one season, television contracts will be lost and more clubs could face administration.

"It's total dismay at the way they are dealing with this. We feel as though we're being bullied."

McLelland recognised that Rangers would be overwhelming favourites to win Division Three, but he said it was something Annan would have to accept even if it denied them the chance of an automatic promotion spot.