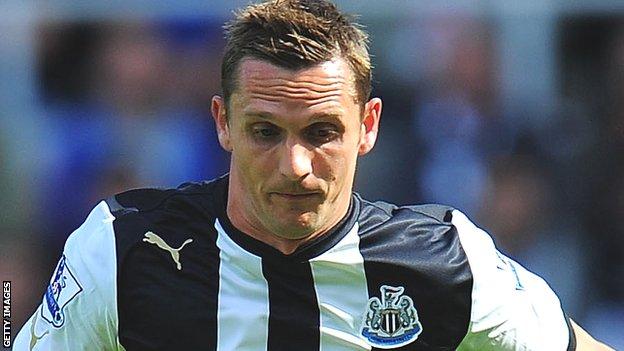 The 32-year-old, capped 22 times by Denmark, finalised a two-year deal after completing a medical at Blues' Wast Hills training ground.

Lovenkrands, who is new boss Lee Clark's first signing, was a free agent following his release by Newcastle.

After joining the Magpies from Rangers in January 2009, he scored 29 goals in three and a half years on Tyneside.

And, having helped fire Newcastle to promotion in his first season, he is looking to do the same for Blues, now that their transfer embargo is lifted and the green shoots of financial recovery appear to have sprouted at St Andrew's.

"I don't focus on that side of things," Lovenkrands told BBC WM. "I just focus on the football.

"We were close to getting promotion here last season and the aim is that we can be again."

"I'm really pleased he's the first through the door for me," Clark told BBC WM. "He has experience at this level and will add pace to the attack."

"I might have lost a bit of pace," joked Lovenkrands, who used to room with Blues winger Chris Burke in their days together at Rangers. "But only because I was so quick when I was younger."

"He played a big part in getting Newcastle promoted," said Clark.

"We had a great season," recalls Lovenkrands. "And, since then, things have been going really well for Newcastle.

"But now the focus is on Birmingham and trying to get back to the Premier League."

Clark added: "He will be a fantastic addition to our squad. He complements the other strikers we've got and can play in combinations with all of them.

"And he's got a good scoring pedigree. He played Champions League with Rangers and scored goals at that level too."

The signing of Lovenkrands, supplemented by the signing-up of club captain Stephen Carr and Colin Doyle on new deals, completes a successful first fortnight in office for Clark.

There remains the threat of star defender Curtis Davies following Hughton to Norwich, although, if that were to come off, then Blues would want it to be only as part of a swap deal involving James Vaughan.