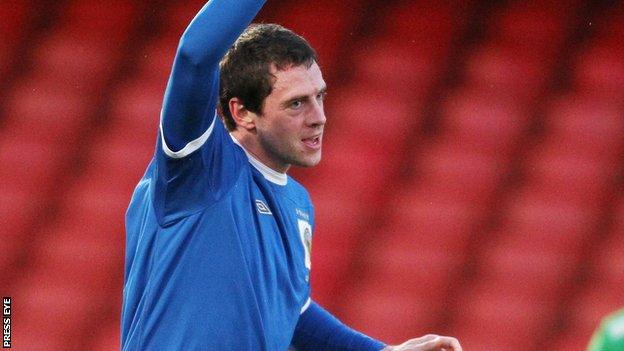 Irish Premiership side Linfield beat B36 Torshavn 4-3 on penalties in the Champions League after Tuesday's 0-0 draw in the Faroe Islands.

After a goalless match in Belfast, the stalemate remained in the second leg of the first qualifying round meeting.

Kaemint Matras hit the bar with the first Torshavn penalty and Blues keeper Ross Glendinning saved the last one.

David Jeffrey's men will be away in the first leg on Tuesday, 17 July.

If they overcame AEL, Linfield would still have to win in the third qualifying round, and then a play-off round, to get to the lucrative group stages.

Linfield found themelves under early pressure in the return game against Torshavn but the Belfast side then got into the game and Mark McAllister headed over from a Damien Curran free-kick and Daryl Fordyce saw a shot go wide.

In the second half, Roaldur Jacobsen fired over for Torshavn while Linfield substitute Browne shot wide.

In the shoot-out, Linfield immediately took the upper hand as Matras missed the opener for the hosts and, after Linfield hit four from four, Cieslewicz missed the decisive kick for Torshavn.