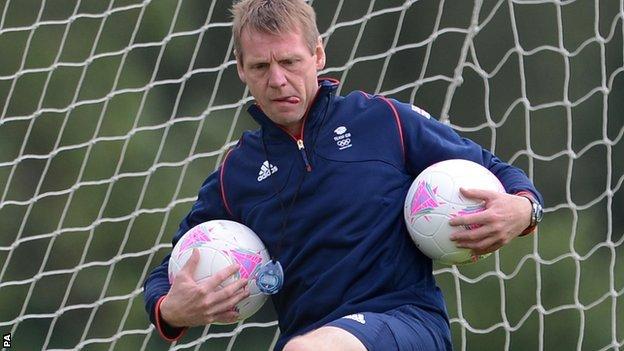 While much of the nation's gaze on Sunday was focused on historic events at Wimbledon, a few miles north west another unique sporting occasion was taking place.

The Great Britain men's Olympic football squad were in Loughborough for their kitting out day - a process that involves every British Olympian receiving the attire they will wear during competition.

For the 18 selected it was a unique occasion that coach Stuart Pearce said they would be unlikely to experience again.

The group met as a unit for the first time at dinner on Saturday.

"We didn't have to introduce ourselves like at Alcoholics Anonymous," Swansea defender Neil Taylor, 23, told BBC Sport.

Joking aside, Taylor said the squad would have to "gel quickly" with less than three weeks before they begin their group campaign against Senegal at Old Trafford on 26 July.

Pearce was given the responsibility of putting together the squad. His selection caused controversy, with the exclusion of former England captain David Beckham from the final 18 and with no representation from Northern Ireland or Scotland.

The ex-England full-back had already given his reasons for leaving out London 2012 ambassador Beckham and added on Sunday that he did not pick the team based on nationality but "on form". Had he been forced to do so he would not have taken the job.

One of those favoured by Pearce, but left out of England coach Roy Hodgson's Euro 2012 squad, was Manchester City full-back Micah Richards.

Does he have a point to prove?

"No. Of course, as footballers you want to play at Worlds Cups. This is an added bonus and will probably never happen again, so to be part of this is amazing," said the 23-year-old.

"Pearce gave me my debut at City, then when he got the England job for a game, he played me. I have so much respect for him and will give all for the man who gave me a chance."

Someone who did make the Euro 2012 squad was goalkeeper Jack Butland.

The Birmingham teenager, who spent last season on loan at Cheltenham, was a late call-up by Hodgson, following an injury to John Ruddy, and will be vying with Middlesbrough's Jason Steele for the keeper's jersey at London 2012.

"The Euros was a fantastic experience," he said.

"It would have taken a miracle to play out there. I was going as back-up. That's probably the main reason I am here - the fact I didn't play."

Other positions that will be hotly contested will be those in midfield, with Arsenal's Aaron Ramsey, Manchester United's Tom Cleverly and Swansea's Joe Allen all fighting to play alongside captain Ryan Giggs.

All were in buoyant mood, although Tottenham left-back Danny Rose had mixed feelings about spending time away from White Hart Lane, where he - and team-mate Steven Caulker - could be making an impression on new boss Andre Villas-Boas.

"I want to show what I can do. It had been agreed by Spurs that I could go on a season-long loan deal to a Premier League club, but that was before manager Harry Redknapp was sacked," he said.

"It's a great achievement being here, but at the same time there's a new manager at Spurs and all the lads will be making impressions on him while me and Steve will be here. But I am delighted about being part of this."