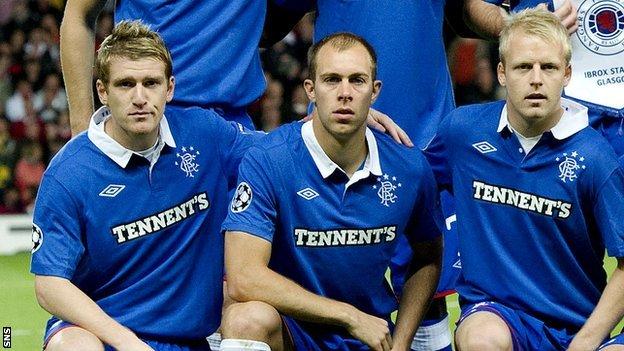 International clearance has not been granted for the transfers of Steven Naismith, Steven Whittaker, Steve Davis, Kyle Lafferty or Jamie Ness.

The quintet have found new clubs after refusing to have their contracts transferred to a newco Rangers.

But, with Rangers seeking compensation, the Scottish FA will not provide authorisation for the moves.

Fifa are expected to grant temporary registrations while the world governing body rules on the matter.

while Whittaker has signed for Norwich and Everton are Naismith's new employers.

Ness moved to Stoke City and Lafferty is with Swiss club Sion.

Clubs request international transfer clearance (ITC) through their own national association, who then contact the SFA who, in turn, contact the club the player is leaving.

However, in this case, the issue is muddied by Rangers FC plc being consigned to liquidation and the newco Rangers having not yet become members of the SFA.

Eleven players have refused to join the new company set up by Charles Green after he purchased the assets of the Ibrox club.

Those leaving have been advised by their union that they do so as free agents.

Green contests this and has written to all clubs in England warning that the players are in breach of contract.

And the union's lawyer Margaret Gribbon said of international clearance not being granted: "It is no surprise.

"There are objections from Rangers plc and the newco. We knew it was going to happen. They were always going to do that and there is a process that now has to be followed.

"At the moment we are assisting two clubs to get clearance from Fifa and our application is being supported by letters from the English FA and PFA Scotland."

If ITC is refused by an association, then the association of the club the player is moving to can ask Fifa to intervene.

Fifa say they have received no requests on behalf of any former Rangers players.