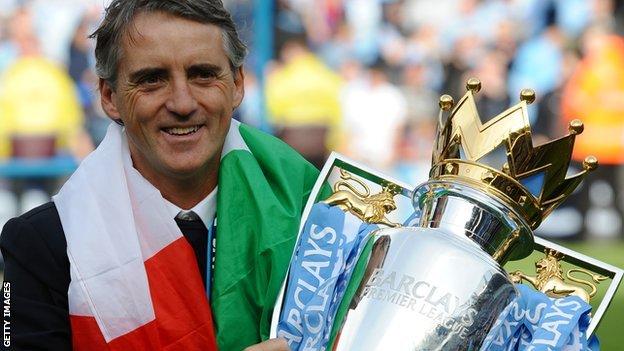 Mancini replaced Mark Hughes as City boss in December 2009, guiding them to the FA Cup in 2011.

A year later, City secured their first league title since 1968.

"Manchester City is a fantastic football club," Mancini told the club's website. "I am very much looking forward to the challenges and excitement ahead."

"I am delighted to be able to give all of my efforts to Manchester City for a further five years. The opportunity which exists to build on our recent success is enormous," he added.

Mancini brought the Premier League crown to the Etihad Stadium on a dramatic final day of the season when Sergio Aguero's injury-time strike snatched a 3-2 win over QPR and secured the championship on goal difference over rivals Manchester United.

City begin their defence of the title at home to Southampton on 19 August, but Mancini also has a second Champions League campaign to prepare for.

Their first appearance in the competition ended when they failed to progress from a group that contained eventual finalists Bayern Munich.

"This new agreement allows Roberto to focus on the challenge of guiding a team which is capable not only of defending the Premier League title, but one which can compete for European honours," said City's interim chief executive John MacBeath.

Reports had linked 47-year-old Mancini with the post of Russia manager, vacant since the departure of Dick Advocaat after Euro 2012.

City's title win added to Mancini's success in his previous managerial post at Inter Milan, where he won Serie A in three consecutive seasons.

Former City defender Danny Mills believes Mancini would have left the club this summer if he had not delivered the title last season.

"It's a massive cliche but in football goals do change games and they also change managerial careers," he told BBC Radio 5 live.

"If that Sergio Aguero goal after three minutes of stoppage time hadn't gone in then Mancini could have been on his way out and looking for another job.

"He will be in demand and the owners want stability. They've got a training ground under development and they want it to be a super academy and Mancini is seen as a massive part of that."