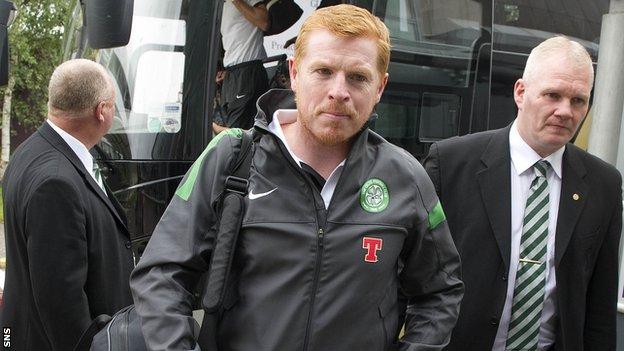 Manager Neil Lennon intends to work his Celtic team hard in pre-season as he targets success in Europe.

"It's imperative we make inroads in Europe again this year," Lennon told the club website.

"It would be nice to get into the Champions League group stages but I'm under no illusion how difficult that's going to be.

I want to progress this team as far as I can

"The qualifiers are a major concern because they are always hard-fought, so we are doing a lot of preparation."

Last season's Scottish Premier League winners enter the Champions League third qualifying round, with the draw taking place on 20 July and the first leg due to be played on 31 July or 1 August.

Should Celtic progress, they will compete in the play-off round for the right to enter the group stage of the competition.

However, if they lose either the third qualifying round tie or the play-off, Lennon's side will drop into the competition they competed in last season, the Europa League.

"We had a very good campaign last year in a very tough group so the players have a belief about them that they can compete at that level," Lennon said.

"I'm very wary of the qualifiers, they are very difficult games and our first one is going to be very soon.

"Everyone wants to play at the big table and that's our whole focus. We go into this as champions and that is a fantastic feeling, so hopefully that will give the players an extra spring in their step.

"If we qualify then you never know where it will take us."

On the domestic front, Celtic begin the defence of their title on 4 August at home to Aberdeen and will be considered clear favourites for another championship, due to Rangers' absence from the division.

"We have a vibrant young team, I want to progress this team as far as I can," added Lennon.

"There will be no slacking off or complacency, we have a lot to look forward to and that's what we are preparing for, but I need to be very clear, we need our fans with us every step of the way."