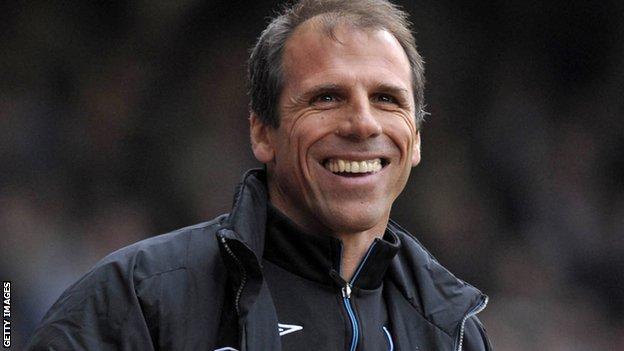 Dyche led the Hornets to their highest finish for four years last term, but was sacked by new owners the Pozzo family to make way for Zola's arrival.

"It's a challenge because Sean has done a very good job and my appreciation goes to him," the former Chelsea striker told BBC Radio 5 live.

"It poses a big challenge for me but I am excited by it."

He added: "It will push me and the players to improve. Hopefully everything is going to be in place and we can do a good job."

The Pozzos, who also own Serie A side Udinese and Spanish La Liga outfit Granada, completed their takeover of the Championship club in June and relieved Dyche of his duties a week later.

They immediately handed a two-year deal to fellow Italian Zola, whose single previous managerial stint came with West Ham, and are likely to offer the new manager the opportunity to loan players from their two European clubs.

"They've been in football for 25 years and they have a very good record," said 46-year-old Zola.

"They invest their own money but they invest it wisely. They are very good at finding good young players which is something that suits this club.

"I have my way of playing and the good thing for me is when I need a player in a certain position they can provide me with four or five choices - good choices."

Zola, who scored 80 goals in 312 games for Chelsea, says he will be under no pressure to mastermind an instant promotion to the Premier League.

"When it happens, I don't know - but that's what we are trying to do," he explained.

"We will try to make it work quickly but we will need some time."

Meanwhile, the club have already been linked with Czech international Daniel Pudil, 26, and his compatriot Matej Vydra, 20, who play for Udinese and Granada respectively.