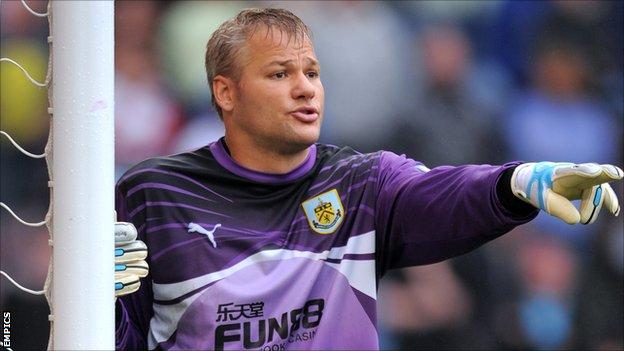 Burnley goalkeeper Brian Jensen has targeted a regular starting spot next season after signing a new one-year contract at Turf Moor on Monday.

Injuries and the form of Lee Grant restricted the 37-year-old to just four first-team appearances in 2011-12.

Jensen told BBC Radio Lancashire: "I always said that Burnley had first priority. It's always been a place that I wanted to stay.

"I'm not ready to retire yet. I want to fight for the shirt."

The Dane's latest contract will take him to a decade with the Clarets and he has been rewarded with a testimonial by the Championship club.

"It's probably not going to happen a lot in football now so I'm really proud of myself and my family, who have had to stick by me through thick and thin," he continued.

"We've had our ups and downs in the past but it's been really enjoyable and to do that (stay at the club for 10 years) is a great achievement and I can only thank Burnley for that."

Jensen has played 307 times for Burnley since joining from West Bromwich Albion in 2003 and won promotion to the Premier League via the play-offs in 2009.