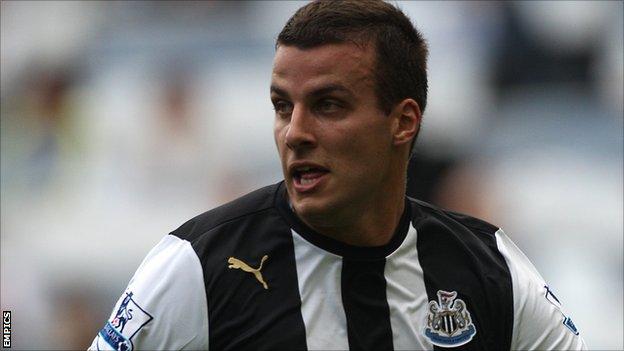 Newcastle United assistant John Carver has said Steven Taylor will be nurtured back to first-team duty, after a long-term ruptured Achilles tendon injury.

The 26-year-old defender is set to return to training after a summer of rehabilitation in tandem with Magpies physio Derek Wright.

"Steven is itching but we're going to be careful," Carver told BBC Newcastle.

"The manager won't stick him in until he's ready and the medical staff say he's OK and ready to play."

Carver added: "He's come back in great condition and looks as though he's raring to go.

"He's so enthusiastic, he's desperate to do well for this football club, but we've waited this long for him to return so we might as well wait until he's fully ready."

Meanwhile, Newcastle will also have Sylvain Marveaux back in their ranks for the 2012-13 Premier League campaign after an injury-hit debut season.

The France midfielder, 26, underwent surgery on hip and groin problems last season, and was limited to 10 appearances in all competitions.

"In fairness a fit Sylvain and Steven are like two new players," Carver continued.

"We missed both of them for a huge part of the season, although Sylvain got a run out toward the end of last season and he's come back really sharp.

"He's done a lot of work in France over the summer and come back with a huge appetite."

The full interview with John Carver from BBC Newcastle's Total Sport programme can be heard on the iPlayer.