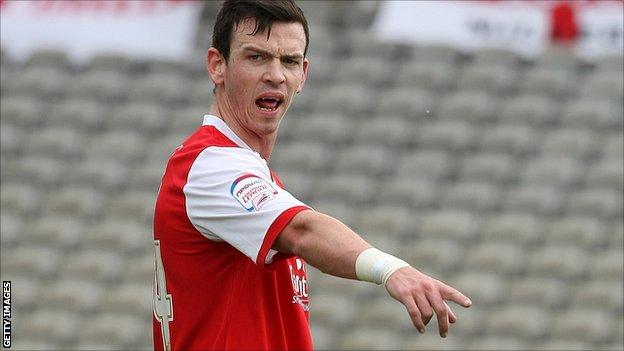 The 24-year-old centre-back left the Millers in May after one season at the club, following spells with Stockport and Scunthorpe, and signs a two-year deal with the U's.

"I'm very excited, it's not nice being out of work when you are a footballer," Raynes told BBC Radio Oxford.

Raynes will have to displace captain Jake Wright as well as former Chelsea centre-back Michael Duberry, but the Manchester-born defender says he is relishing the opportunity.

"I'm only 24 and I'll be right behind them and pushing them. You couldn't pay for the knowledge he is going to give me and I'm looking forward to picking his brain.

"Not many people play 40 or 50 games any more and we'll all be pushing each other and I'm backing myself to make the step up."

Raynes had three options, but says U's manager Chris Wilder sold the club to him and he believes Oxford should count themselves as promotion contenders next season.

"Chris really sold the club to me, it seems like a club where you can better yourself physically and mentally and I'm really into that," he said.

"I had three options but this was always my favourite.

"It's going to be a tough league, people are spending a lot of money, we need a good run and to stay fit and if Oxford play like they did last season then we should absolutely batter it."

Raynes says U's fans can expect a no-nonsense defender who is not afraid to put his body on the line for the cause.

"I'm a hard-working player," he added.

"I wouldn't say I was the prettiest player but I put my head on the line and I'm an old-school centre-half and I like to head it and kick it and will take the broken noses."