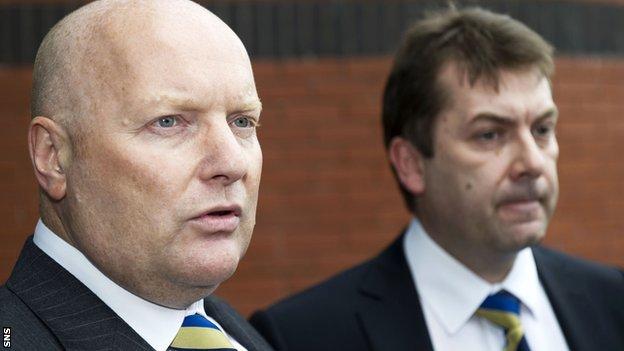 Proposals from Scottish football's three governing bodies include a new top tier division of 16 teams by 2015.

The only proposed change for the coming season would be the introduction of a promotion/relegation play-off between the top two divisions.

The package of reforms have been revealed two days before a vote on the future of Rangers newco.

On Friday, the 30 Scottish Football League clubs will gather at Hampden to rule on the new company's application, with options to grant entry at Division One or Division Three level.

A joint statement from the Scottish FA, Scottish Premier League and SFL confirmed that an enlarged top tier was on the agenda, along with the introduction of play-offs, streamlining governance and a change in the distribution of monies.

There will be changes to the size of the other leagues, with parachute payments and a pyramid system also suggested.

Many clubs have already indicated their desire to see Rangers start in Division Three.

But, while there is no mention of the Rangers situation in the statement, the authorities may argue that they cannot afford to press ahead with reform if that is the case.

The joint statement continued: "Upon agreement by the respective boards, the proposals will be placed before the SPL and SFL clubs for approval, to be activated immediately and phased in over a two-year period.

"A working party will be formed, including three representatives from both the SPL and SFL, to devise a new structure for the senior professional game in Scotland.

"This group will have an independent chairman appointed by the SFA. They will be tasked with delivering by 30 November, a recommendation for structural change effective 2013/14."

In the event that a final decision is not reached by 30 November, the SFA will move to implement the changes.

"We're getting all of the facts now and we can discuss it further on Friday," said Dunfermline director of football Jim Leishman, who sits on the SFL board.

"The clubs will be able to vote whatever way they like, nobody is holding a gun to their heads."

SFL chief executive David Longmuir described the proposed changes as "something worth going for".

He added: "There are a number of options being looked at which involve the restructuring of the league.

"What we are trying to do here is take Scottish football forward in a way that excites fans and keeps clubs viable."

Meanwhile, BBC Scotland has learned a final decision on which club should replace the old Rangers in the SPL is unlikely to take place before Monday.

Dundee - runners-up in last term's First Division - were previously proposed as the team to take up the vacancy but, Dunfermline, who were relegated from the SPL last season, feel they should be invited back to the top flight.

The issue of where to place Rangers originated when the club could not be saved from liquidation and was relaunched by a new company.

The newco had their application to replace the old Rangers in the SPL rejected and then applied to the SFL, adding they would enter whichever league the organisation deemed fit.

SFA chief executive Stewart Regan fears not putting Rangers into Division One would have a negative financial impact on all clubs.

Last year, SPL clubs considered and eventually rejected plans to reduce the amount of clubs in top league to 10, with chairman Ralph Topping and chief executive Neil Doncaster claiming a 16-team division was not financially viable.

Regan was also an advocate of a 10-team SPL.