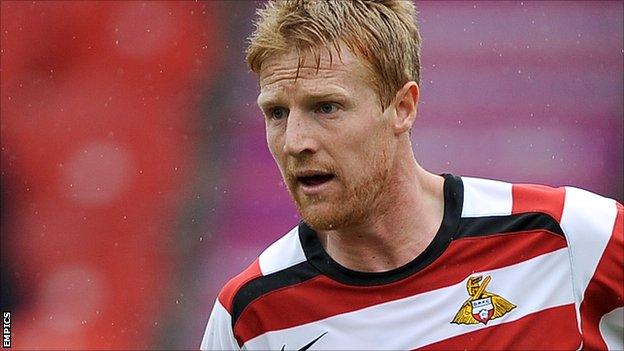 Defender Adam Lockwood is hoping to pass on his experience and improve his own game with new club Bury.

The 30-year-old, who left Doncaster at the end of last season, told BBC Radio Manchester: "It's a smaller club but they do things in the right way.

"Football is a harsh business and it's nice to see clubs thinking about how they want to structure a club and make it an environment for people to learn.

"I felt it would be good to part of that and improve myself."

The former Yeovil man continued: "I don't think you can ever stop learning. I want to make myself a better player and hopefully I can do that."

Lockwood is one of four new signings made by manager Richie Barker so far this summer, as Bury prepare for their second year back in League One following promotion in 2011.

Striker Lateef Elford-Alliyu and goalkeeper Trevor Carson have both signed permanent contracts after loan spells at Gigg Lane last season, while winger Marcus Marshall has joined the Shakers after being released by Rotherham.

Carson spent eight years at Sunderland without making a first-team appearance and, at the age of 24, has played just 52 league matches in his career.

"You train all week and then you come to a Saturday and you're twiddling your thumbs in front of the television," said Carson.

"I'm here with a chance of playing and to challenge for the number one spot. It will be great if I could play every week and that's one of the main reasons I came here.

"Richie took a bit of a punt on me when he first brought me in on loan. I'm thankful for the chance he gave me and hopefully he sticks by me."

While Carson's move had been expected to happen for much of last season, Marshall, who ended on loan at relegated Macclesfield, admitted his transfer was a shock.

"There wasn't much in the pipeline for me," he said. "I was speaking to one or two teams and then Bury came in.

"I hadn't had the greatest season in League Two so I was surprised. They're a footballing side with a young team and a young manager. They can make me a better player.

"Coming up last season, no one knew what to expect from them but they had a great season and I think they'll be shown more respect because of where they finished."