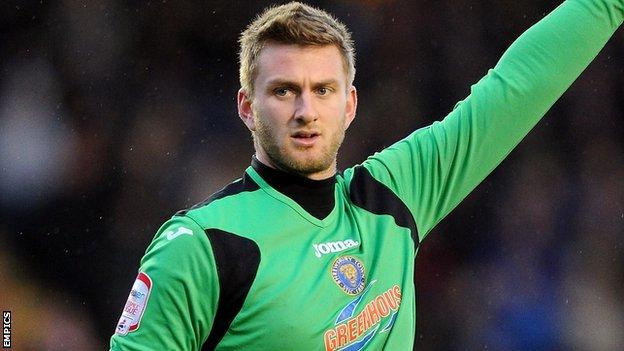 New Port Vale keeper Chris Neal admits he did not expect to move across the Midlands from Shrewsbury this summer.

But, after failing to agree a new deal at the Meadow, Neal is now intent on proving just as big a hit with Vale.

"It didn't work out over the summer as I expected. I thought things would be sorted," Neal told BBC Radio Stoke.

"But, in football, sometimes you have to move on. And I've joined a big club looking to go places. With the new owners coming in, that's not an issue."

After being under a transfer embargo since going into administration in March, Vale's takeover by Keith Ryder has allowed manager Micky Adams to make six signings.

But, like fellow new arrival David Artell, who was part of Crewe's League Two play-off winning team, Neal was also a promotion winner with Shrewsbury, who went up automatically to League One after finishing second.

Vale's chances were effectively ended last season once they had suffered their 10-point deduction following administration.

And Neal is convinced that Vale's remoulded line-up will be good enough to challenge for promotion again.

"Both Dave Artell and myself got promoted last year. And I like to think that we can add a bit of experience and know-how," said Neal.

"The manager sold the club to me. I've seen the quality he's bringing in and I want to be part of a successful side again.

"I've met the chairman and he's stated his intentions to take this club back to where it should be.

"This is a club with ambition that doesn't want to stand still."