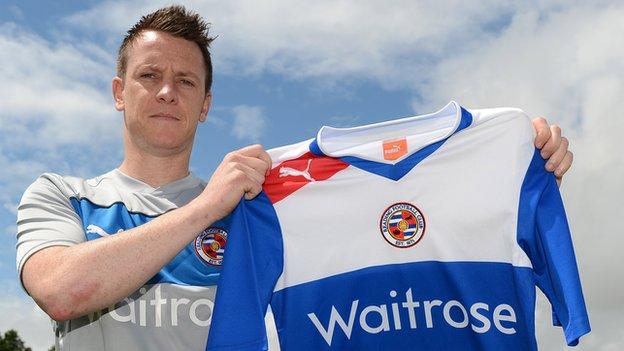 After re-signing for Reading on a free transfer, Nicky Shorey says he had no hesitation in returning to the club where he made his name.

But he left in acrimonious circumstances for Aston Villa in 2008 following the Royals' relegation.

"I spoke to the manager and it was quite an easy conversation," Shorey told BBC Radio Berkshire.

Shorey, who began his career at Leyton Orient, struggled to establish himself at Villa, and was loaned out to Nottingham Forest and Fulham before eventually joining West Brom for £1.3m in July 2010.

I feel good, I've been okay with injuries and hopefully I'll be able to produce on the pitch and get back to the form I had when I was at Reading

But he was released by the Baggies in the summer and Shorey says he is delighted to be back at the Madejski Stadium.

His intention is to regain the form he showed in his first spell with the Royals, during which he won two full England caps.

"I spent many years here previously and I got to know a lot of the staff who are still working here and it was an easy decision for me," he said.

"It's always nice when people want you, and I was delighted to come back because I enjoyed my time here so much.

"I feel good, I've been okay with injuries and hopefully I'll be able to produce on the pitch and get back to the form I had when I was at Reading.

Shorey added: "To be honest, when you get promoted you always have to set out just to stay up and anything else is a bonus. I know it sounds boring but it's true.

"Once you start getting complacent it comes back to bite you. We'll be looking to just consolidate."