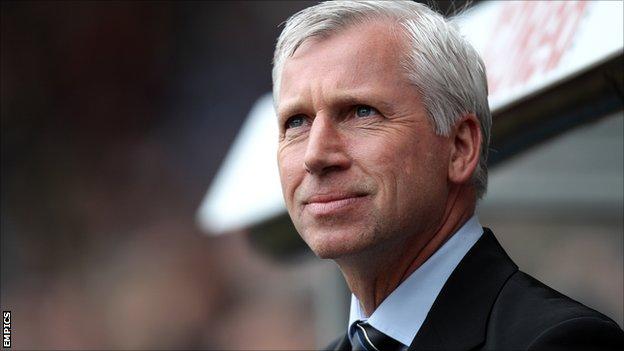 Newcastle United manager Alan Pardew says steady progress has been made in the transfer market with regard to new arrivals on Tyneside.

The Magpies have already signed Romain Amalfitano and Gael Bigirimana this summer, and Pardew has been in dialogue with further targets.

"I think certainly over the next 14 days that maybe one will come in, we're looking to bring in two, maybe three."

In addition to incoming players, Newcastle are also keen to retain the bulk of the squad that achieved Europa League qualification via their Premier League finish in 2011-12.

Demba Ba has been linked with a move away from the club, while rumours regarding Yohan Cabaye have also surfaced.

"The most important thing is keeping hold of our good players, our great players," Pardew added.

"We've got a very good team here, and we have aspirations to improve next year.

"It isn't easy, but so far we've done well, most people have been away and we've had a few enquiries.

"But people now realise if they want to take anyone away they have to pay way over the odds."

BBC Newcastle's interview with Alan Pardew will be broadcast on the Total Sport programme on Wednesday, 11 July.