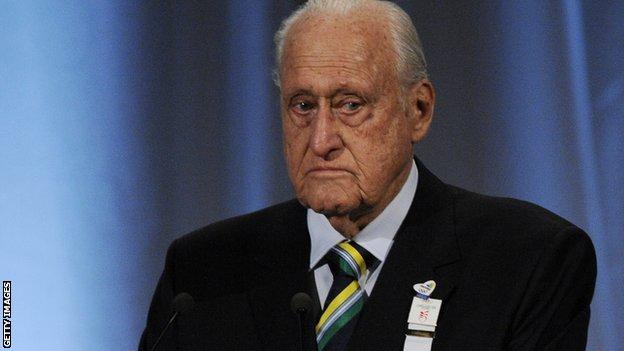 The Swiss prosecutor's report, published by Fifa, reveals the pair may have received up to 21.9m SFr (£14.4m).

They are the only two Fifa officials named in the report.

The idea that he [Blatter] may have been aware of what was going on is deeply troubling. If he knew that the bribery was occurring and everyone right now is reading the document to try and understand who knew what and when. If he was aware of the bribery then he's part of the problem.

Switzerland's supreme court ordered the release of the documents identifying which senior officials took millions of dollars in payments from ISL, Fifa's marketing partner until it collapsed into bankruptcy in 2001.

The papers were released to five media organisations, one of which is the BBC, and detail the court settlement which closed a criminal probe of the ISL case in May 2010.

In November that year, the BBC's Panorama programme alleged that three senior Fifa officials, including Teixeira, took bribes from Swiss-based ISL in the 1990s, though commercial bribery was not a crime in Switzerland at the time.

A statement issued by the BBC said: "A year long legal battle by BBC Panorama to force publication of documents related to a confidential police investigation into bribery and corruption at Fifa was vindicated today.

"In Panorama - Fifa's Dirty Secrets in November 2010, reporter Andrew Jennings named the two officials as recipients of bribes from the Swiss ISL sports marketing company, which was repeatedly given lucrative World Cup marketing rights by FIFA."

Fifa president Sepp Blatter said in October 2011 that he wanted to release the ISL dossier, despite his organisation seeking to deny access to its contents at the same time.

"Fifa is pleased that the ISL non-prosecution order can now be made public," football's world governing body said in a statement.

"This decision by the Federal Court is in line with what Fifa and the Fifa president have been advocating since 2011, when world football's governing body announced its commitment to the publication of the ISL non-prosecution order.

"The decision of the Swiss Federal Court also confirms that only two foreign officials will be named as part of the process and that the Fifa president is not involved in the case."

Havelange was Fifa president for 24 years before being succeeded by Blatter in 1998. The 96-year-old Brazilian, who remains Fifa's honorary president, has been treated extensively in a Rio de Janeiro hospital this year for septic arthritis.

He resigned his 48-year International Olympic Commitee membership, citing health reasons, in December, days before the Olympic body was due to sanction him following its own investigation into wrongdoing connected to ISL.