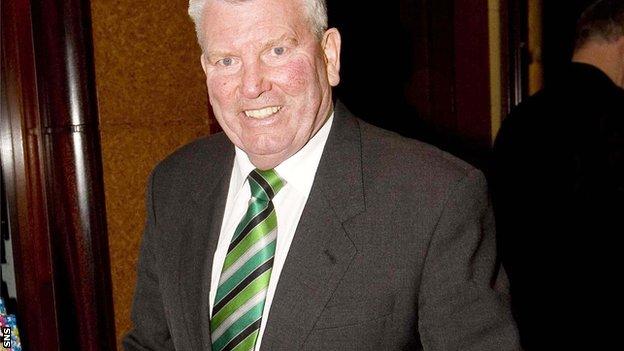 Joe McBride, the much-travelled striker who was part of the Celtic squad that won the European Cup in 1967, has died after suffering a stroke, aged 74.

McBride began his career with Kilmarnock and also had spells with Wolves, Luton, Partick Thistle, Hibs, Motherwell, Dunfermline and Clyde.

McBride's association with Hibernian was brief, but he made a huge impact and scored a phenomenal 58 goals

Celtic chief executive Peter Lawwell said: "Joe was a very fine man, an absolute gentleman and someone who gave tremendous service to the club."

McBride, who joined Celtic from Motherwell in 1965, missed out on playing in the European Cup final against Inter Milan after picking up an injury on Christmas Eve that kept him out of action for the rest of the season.

Up until that point in December, the man born yards from the home of Glasgow rivals Rangers in Govan had already scored 35 goals in 26 games for Jock Stein's side.

He left for Hibs in 1968, having won two league championships and two League Cup medals with the Parkhead club, scoring 86 goals in 94 games, but continued his high scoring rate with the Edinburgh outfit.

McBride still wore the Celtic colours as part of the matchday hospitality team of legends who meet and greet the fans and Lawwell told the club website: "The passing of Joe McBride is tragic news.

"It was a privilege to know Joe and it was fantastic that someone who gave so much to Celtic was still involved with the club in a number of ways.

"He will truly be sadly missed by everyone at Celtic."

"It was a pleasure to be in Joe's company and, on a personal level, Joe was someone who was always very supportive to myself," added the former midfielder.

"I know Joe Jr well too and, on behalf of the whole management and backroom team, and the players, we offer our sincere condolences to Joe's family."

Hibs praised McBride's "huge impact" during his time with them.

"A prolific striker, McBride's association with Hibernian was brief - totalling 91 appearances in just over two years - but he made a huge impact and scored a phenomenal 58 goals," said a statement from Easter Road.

"Our sincere thoughts are with his family at this difficult time - he left a lasting impression on our club and he will always be remembered with great affection."

It was McBride's form at Fir Park that captured Stein's attention.

Motherwell chief executive Leeann Dempster said: "Although Joe will probably be remembered by most in the Scotland football world for his time with Celtic, Motherwell fans who had the pleasure of seeing him blossom will always hold him in high regard.

"We take a great sense of pride in his achievements whilst he was at Fir Park and how players of his quality graced our club in what was a golden era in terms of quality of football."

"All at Firhill were saddened to learn today of the passing of one of our former players, Joe McBride," said a website statement.