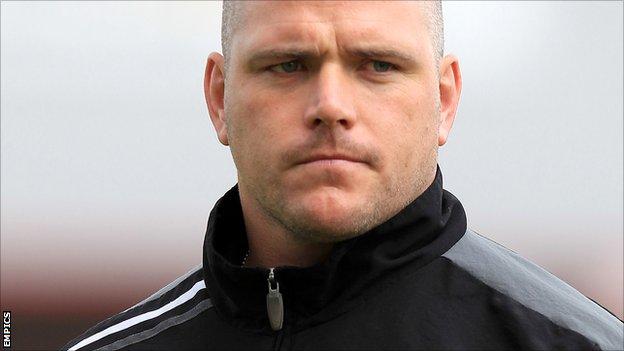 Manager Jim Bentley says being one of the favourites for relegation from League Two will bring the best out of his Morecambe team next season.

"I love being the underdog," he told BBC Radio Lancashire. "I've been the underdog all of my life.

"We're second favourites to go down and we have one of the smallest fan bases.

"When you have a good set of lads, who have good spirit and will be organised, fit and strong, being backed by great supporters, it takes you a long way."

Morecambe finished 15th in League Two last season, in Bentley's first campaign in charge, and the 36-year-old believes his team can upset the odds.

He added: "It was proved last year because no one gave Crewe or Cheltenham a chance, but they upset everyone and got into the play-off final and Crewe eventually went up.

"You see it every year. The year we finished fourth, no-one gave us a chance.

"We will have our down spells and we'll win games. It's important that we enjoy the ride, the fans stick with us and we all stick together."

Bentley has been able to add Robbie Threlfall and Andrew Wright to his squad and hopes to welcome some more new faces ahead of the new season.

"Managers always want that little bit more and I'm no different," he said. "I'm trying to get a couple more players in at the moment.

"We're certainly going to need another goalkeeper to push Barry Roche. Hopefully we can get someone in sooner rather than later."