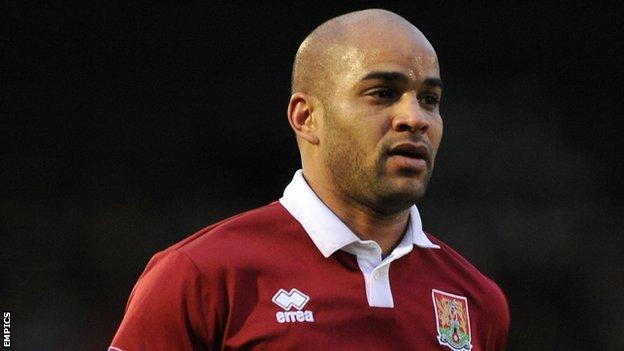 The 34-year-old retired from the professional game in December, ending his career at Kettering Town.

"Anyone who plays alongside him will benefit from his experience of playing at the top level. If he's fit, he'll be playing and scoring goals."

He's got a lot to offer, not just on the pitch, but with some of the experiences he's had in life

The Steelmen boss continued: "He's got one or two injury problems but he had them when he was at Northampton with me - it's about managing the situation.

"Obviously we'll only be training twice a week which will help him. I think he certainly can do a job at this level."

McKenzie has scored 115 goals in his career and counts Crystal Palace, Fulham, Coventry and Charlton amongst his other former clubs.

Before his last match for Kettering, he spoke out about the depression he battled earlier in his career. He was later sentenced to six months in prison for motoring offences.

"He's got a lot to offer, not just on the pitch, but with some of the experiences he's had in life. He can guide one or two."

Ives, 21, is a former Cambridge United trainee and joined the Steelmen last summer, while 19-year-old Fox came through the ranks at the Magpies.

"Sam is a very technical footballer and I want people who can handle the ball in the squad. He's been training with us and stood out really well," the Town boss said

"Nathan made his debut in the Football League with Notts County at 16 and was rated very highly. It didn't quite work out for him, he lost his way a little bit and we can give him that platform to express himself."

Meanwhile, Steelmen centre-half Phil Gulliver, who had agreed non-contract terms for next season, has chosen to join King's Lynn Town instead.

"Ideally, I would like an experienced player at centre-back but you can't always pick and choose," Sampson said. "I was disappointed to lose Phil but in the non-league game, these things happen."