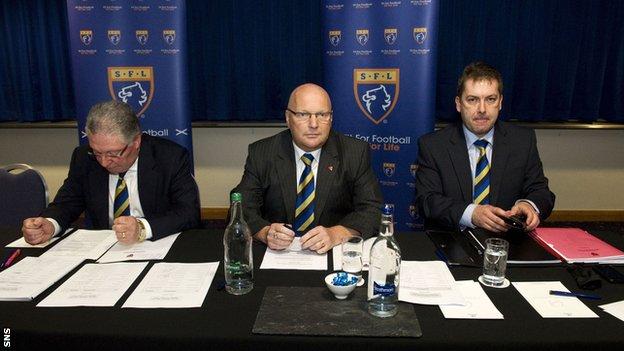 Rangers chief executive Charles Green says he will not challenge the vote by the Scottish Football League to place his new club in Division Three.

At Hampden, 25 of the 30 clubs were against Rangers being in Division One.

The decision has been taken in the interest of sporting fairness

"We are grateful to be accepted as members of the SFL and accept their decision to vote us into Division Three," said Green.

"We made clear we would play where we were told to play and we just want to get back to playing football."

Green's Sevco consortium had been forced to apply for entry to the SFL after Scottish Premier League clubs voted against the new Rangers being admitted to the top flight with the old company destined for liquidation.

Scottish Premier League chief executive Neil Doncaster and his Scottish Football Association counterpart, Stewart Regan, had both warned of dire financial consequences should Rangers be denied a place in Division One.

And Rangers' website had immediately responded to the vote at Hampden by suggesting that the club had assurances from both men that an SPL2 would be launched to include Rangers and other invited clubs to safeguard sponsorship and television contracts.

Both Clyde and Dunfermline Athletic had expressed those fears immediately prior to the meeting at Hampden, where 29 clubs had initially voted in favour of admitting Rangers to the SFL before taking a second vote on the division in which they should play.

But Rangers quickly toned the statement down to say: "It was mooted last week that plans for an SPL2 would swing into action, but it is not known if this will be the case."

And Green followed that by saying: "This decision maintains the sporting integrity that clubs and fans across Scotland have been calling for, but it also impacts massively on Scottish football as a whole and only time will tell what the consequences will be.

"Rangers has been handed the ultimate punishment of starting again from the bottom of the leagues, but there is an overwhelming feeling among fans and within the club of 'wiping the slate clean' as a club free of sanctions.

"The people who brought shame on this great club are no longer part of it and everyone at Rangers is focused on rebuilding the club on top of a solid financial foundation.

"We wish to play a constructive part in Division Three and encourage our fans to support the other clubs within the league by attending matches and delivering to them the benefits of having Rangers within their league.

"It is a matter of regret for all of us involved with Rangers that the issues surrounding the club resulted in the SFL and its members being placed in a very difficult position not of their own making."

Following negotiations with the SFA and SPL, the SFL clubs had been offered play-offs to the SPL and a working party into an expansion of the top flight in return for Rangers being accepted in the second tier.

However, they voted to place them in the bottom rung and SFL chief executive David Longmuir said: "Today has been one of the most difficult decisions to be made by all concerned.

"The decision has been taken in the interest of sporting fairness.

"I am comfortable that the Scottish Football League has made a very decisive decision."

Longmuir said his members clubs were united and still in favour of the reorganisation of Scottish football.

"I am proud that the First Division clubs made it very clear that they are looking for an all-42 club solution to Scottish football," he said.

"It is now for others to work with us to take the game forward."

SFL president Jim Ballantyne - whose club, Airdrie United, are poised to now be promoted to Division One, with Stranraer progressing to Division Two - hoped the SPL and SFA would accept the decision.

"We don't have any control over the SPL and they are entitled to do whatever they wish, within their own rules," he said.

"But it's important to mention that the Division One clubs went out of their way to make it clear that their route regarding a solution involved all 42 teams.

"Other bodies are going to have to look at the decision we've taken and decide what view they are going to take."