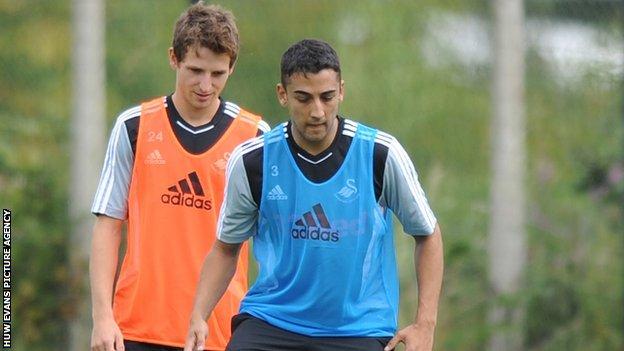 Michael Laudrup says Swansea can be proud of having three players in Team GB's Olympic football squad but admits their inclusion is not ideal for his own preparations.

Joe Allen, Scott Sinclair and Neil Taylor have been selected..

The Olympic final on 11 August is seven days before the opening day of the Premier League season.

"The worst case [scenario] for me would be the best case for them going to the final in the Olympics," said Laudrup.

The Swans are the best-represented club in Stuart Pearce's 18-man squad with the inclusion of Welsh internationals Allen and Taylor and England Under-21 midfielder Sinclair.

Laudrup's side kick-off their Premier League season at Queens Park Rangers on 18 August, seven days after the Olympic football final at Wembley.

And with Wales facing Bosnia-Hercegovina in a friendly in Llanelli on August 15, Laudrup does not expect to see much of the three players if Team GB reach the Olympic final.

"If they go on to the end they could present themselves here on the 16th [August]. That will be only 48 hours before the first game in the league," said the former Barcelona striker.

"That's not very good for us but on the other hand I think it's fantastic for Swansea to have three players going to the Olympics.

"The league is not finishing after the first or the second game. We have to play until the end of May.

"They will catch up and we're talking about three regulars from last season. They know all the others.

"They're not three new players coming in from abroad [who] need three or four weeks to get to know their team-mates. I think they will catch up quickly."

Flores has joined on a three-year-contract from Genoa while Villarreal's de Guzman will spend the season at the Liberty Stadium.

"He's [Flores] from Spain but he could have been from here because he's very aggressive one against one and is very good in the air as well," added Laudrup.

"And I think Jonathan will fit perfectly into the way Swansea play.

"I think that's important that players coming from outside adapt to the style of the team and I think both of them will."